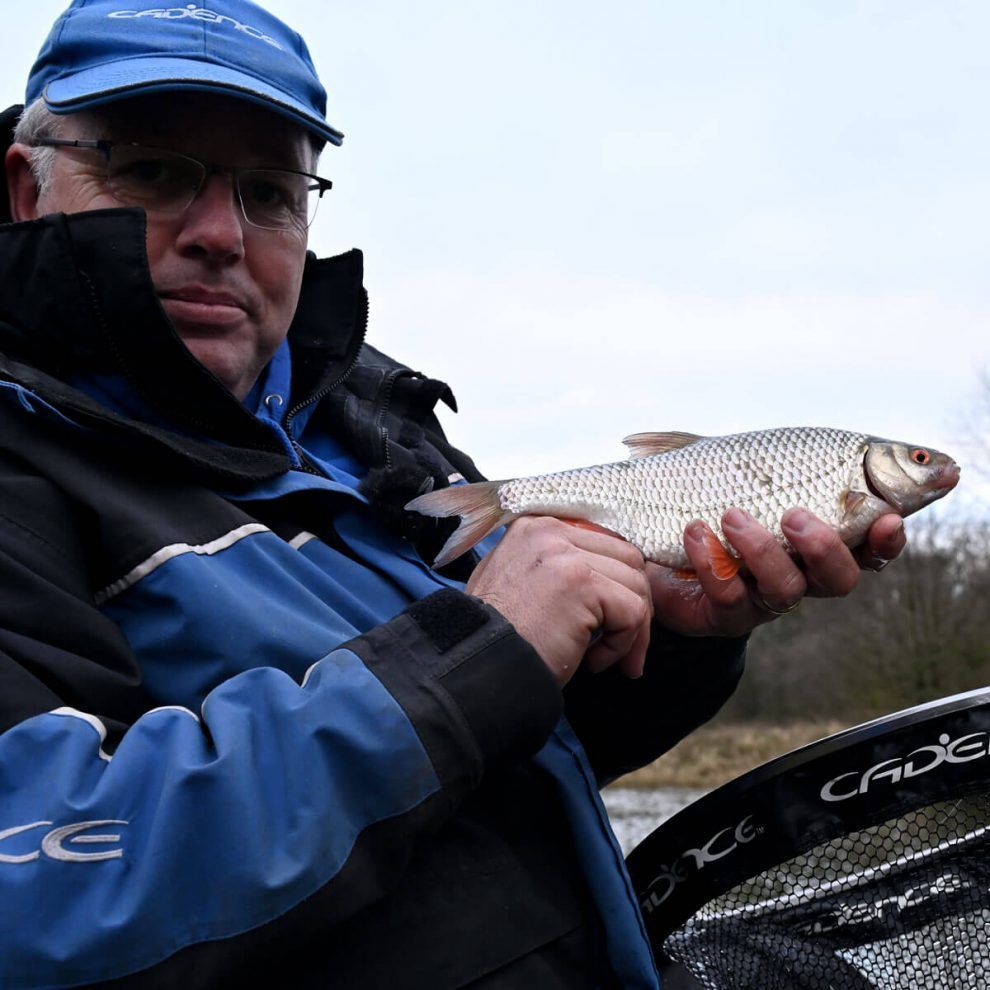 We’re pleased to report that cameraman Chappy is on the mend after a long illness. We sent him out with Cadence’s North West Ambassador, Alan Barnes on a chilly day to the Leeds-Liverpool Canal. Alan was challenged to catch a few fish from his local Adlington stretch, and Chappy was there to record the events as they unfolded.

It’s often the case that fishing can surprise you and when the rivers are out of sorts then canals offer a chance to catch some wild fish from a natural venue, and we were in for a surprise when I accompanied Alan to a stretch controlled by Wigan and District AA between Chorley and Adlington.

Only days earlier the canal had been frozen right across and that had been the case for a couple of weeks due to successive nights of frost and snow, sleet and hail.

Suddenly however, the winds had swung to the west and temperatures had settled with overnight lows of 1 or 2 Celsius and the mercury climbing to a balmy 7 Celsius on the day of the blog.

Alan set up three top three kits for his Cadence CP1000 pole and explained, “Two rigs are for breadpunch fishing and the other is an out and out caster rig.

The first breadpunch rig is a .3g Drennan SF2 on a 0.10mm mainline with a 0.09 Colmic Stream hooklength, finished off with a Colmic N957 size 18 nickel micro-barb hook.

This features a block of Stotz forming a main bulk about 15 inches from the hook, with three half number 14 Styls as droppers. The rig is plumbed to dead depth at 10 metres, where there is four feet of depth, then the float is slid a float length over depth to present a 4mm breadpunch pellet hard on the bottom in the hope of skimmers or bigger roach.”

Alan explained that his alternative bread rig is much finer and lighter, with a string of spread Styls to attract bites as the breadpunch falls through the water. His float was a 4 x 10 PB Silvers pattern with a carbon stem and plastic bristle. The hooklength was a 15 cm piece of 0.059 fluorocarbon with a size 24 Colmic B2000, which is a long shank narrow gape hook pattern for fishing for small roach.

“The elastic choice varies, too, depending on which rig is being used. The heavier rig with the .3g float is attached to a number five Preston Slip elastic set through the full length of the pole’s No 2 section and 10 inches of the microtip.

The lighter rig is attached to a top three kit featuring a finer Middy 1-2 elastic set again through the full length of the No 2 section, plus the microtip.”

On both rigs, Alan employs backshot to overcome any tricky sidewind. He explained, “Backshot help with light floats because they keep these floats stable in the water. Without backshot, the line from the float’s side eye to pole tip can be picked up on the wind and the rig dragged through the peg in a very unnatural manner.”

Finally, the caster rig is an old Drennan Pug dibber float in 4 x 10 size. “This is tied directly with no hooklength on 0.08 Colmic Stream line, with a size 22 Colmic N957 nickel, round bend hook. The rig is shotted with six number 11 shots, strung out to create a slow fall of the hookbait through the water. The caster rig is also fished on a number five Preston Slip pole elastic through the number two section and a few inches of the microtip.”

“The caster swim is at an angle to my left at 10 o’clock and is fished at 12 metres,” with Alan using a Cadence dolly butt up the back of the 11.7 metre section of the Cadence CP1000 pole.

He initially fed a palmful of well-cooked hemp plus eight casters and spread them around over a three foot round area at 12 metres. He then topped up by catapult, firing just two or three casters to his caster swim every 20 minutes or so. Crucially, he was going to leave the swim alone for the first ninety minutes, to give any roach extra confidence to feed properly.

His bread swim is the first to be fed and using the biggest Drennan feed pot, he deposited a ball of finely riddled liquidised bread with a smattering of MPW punch crumb added to it, into his peg at 10 metres. The mix is pushed through a pinkie riddle prior to feeding and wetted up using an atomiser spray bottle.

Kicking off on the .3gramme rig, fishing four inches over depth, he started on a 4mm punch and, after missing two bites, connected with a quality roach of 12 ounces.

The number five elastic, which has benefited from a squirt of pole lube prior to fishing, did its job efficiently.

Over the course of the next half-hour a further four stamp roach up to 1lb joined the first in the keepnet before the bigger roach switch off and smaller roach fill in.

Alan said, “In winter, it is best to err on the side of caution. If you feed too much, too soon, you can wreck your chances altogether. So, remember that ‘little and often’ is the key phrase to bear in mind. If your bites stop, you have to feed something to create fresh interest.”

With the session having started at 10:30am, Alan checked his watch and at noon picked up the caster rig and after three drops, each timed at 90 seconds, put it down, not having registered a single bite.

“Newcomers to canal fishing should not be fazed by this happening to them,” explained Alan. “It does not mean that you will not catch on your caster swim; it just means that the fish have not responded properly yet and if you persist with your gentle feeding regime of two or three casters every twenty minutes or so, you are doing no harm and increasing your chances of caster working later in your fishing session.”

An hour passed and Alan added a dozen small roach to his keepnet, all caught on the lighter breadpunch rig, being fished two inches off the bottom at the longer length of 11.7 metres. There is the odd, better roach up to two ounces, too, but Alan was itching to have another look on the caster swim, having fed it steadily.

At 1 o’clock he picked up the caster rig and laid it in. After a minute the float dipped slightly but a bite did not develop properly. However, on inspection of the caster there is no damage. By this point the wind is getting slightly stiffer so Alan incorporated two backshot, both no 10s, on his caster rig, and positioned three of the shot higher up the line towards the float.

He said: “This will help to stabilise the float which is small and has most of its buoyancy in the tip due to its shape. I want to try to keep the caster still on the bottom, rather than have the wind dragging it along, which looks unnatural.”

The ploy worked and on the next drop in, after a minute the float trembled, dipped, popped up, dipped under again and finally sailed away into the murky water. With a crisp lift, five feet of elastic came out of the micro-tip and a pound-plus roach offered dogged resistance on the gossamer caster rig.

Over the course of the next hour or so, Alan added three more nice caster roach to his keepnet before the rain arrived to signal the end of the session.

Lifting out his keepnet, there is somewhere between 5 and 6 lbs of prime roach to be enjoyed for a catch picture before the fish were all safely returned, ready to fight another day.

As Alan packed up, I ask him to summarise what he considers the key elements to a successful day on the canal.

In summary, these are the key points he raised:

Match hook wire strength to line diameters so that the balance between both is correct.

Also, balance rigs to depth of water and pole elastic strengths. i.e., it is hard to set a size 18 hook and a 6mm punch with a .4g or .5g float on a number 1-2 elastic. A four or five is much more effective in such depth. Conversely, a finer softer elastic is best for shallower water.

Ensure your bread for the breadpunch is fresh, no more than day or two old – medium sliced white is cheap and cheerful and up to the job.

Casters should be as fresh as possible and in a variety of shades as sometimes fish want one colour over another.

Be patient with your caster fishing. When you initially lay the rig in, mentally count to 90 in your head. If you don’t get a bite, put the caster rig down and go back to bread fishing, while remembering to gently keep feeding the caster swim, trying the peg every half-hour or so. If the fish are there, you WILL get a bite.

Feeder Fishing on the River Ouse
Getting started, we’re here to help!