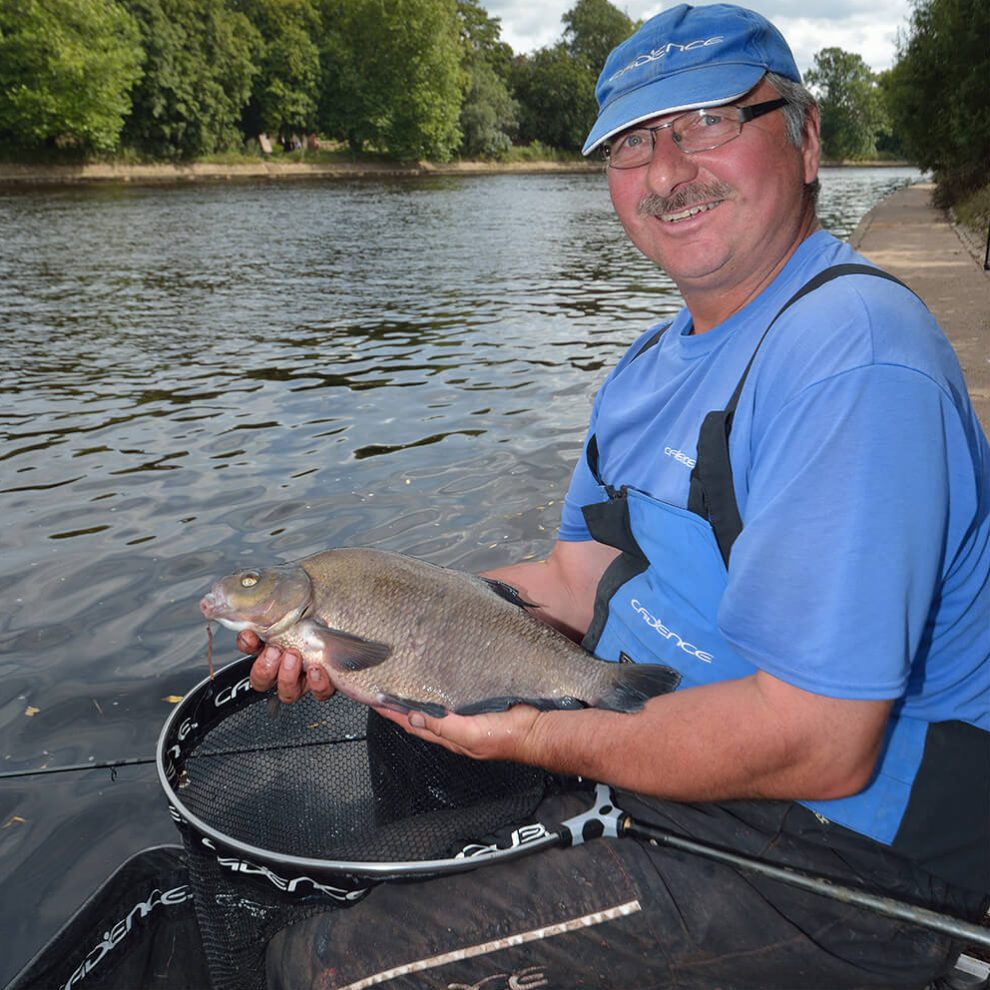 I actually used to live opposite to where I have chosen to fish for this River Ouse session. That was some years ago and the river has changed a fair bit I would say over the last couple of decades. This area is opposite the mouth of the River Foss known as Blue Bridge, and it has always been a top location for bream, but the shoals do wander about a bit. Sometimes you do get lucky though and some superb ton-up hauls have been landed here recently.
The Ouse here is deep and sluggish, with around 15 to 20 ft in the middle. There is a fair amount of boat traffic too. That can put anglers off, but the fish can be tempted in the middle of the day, but to be on the safe side I’d suggest either a very early start or an afternoon start leading to a late evening finish. Reducing the risk of pleasure craft spoiling your session makes a lot of sense, and I’ll be fishing into the evening today. 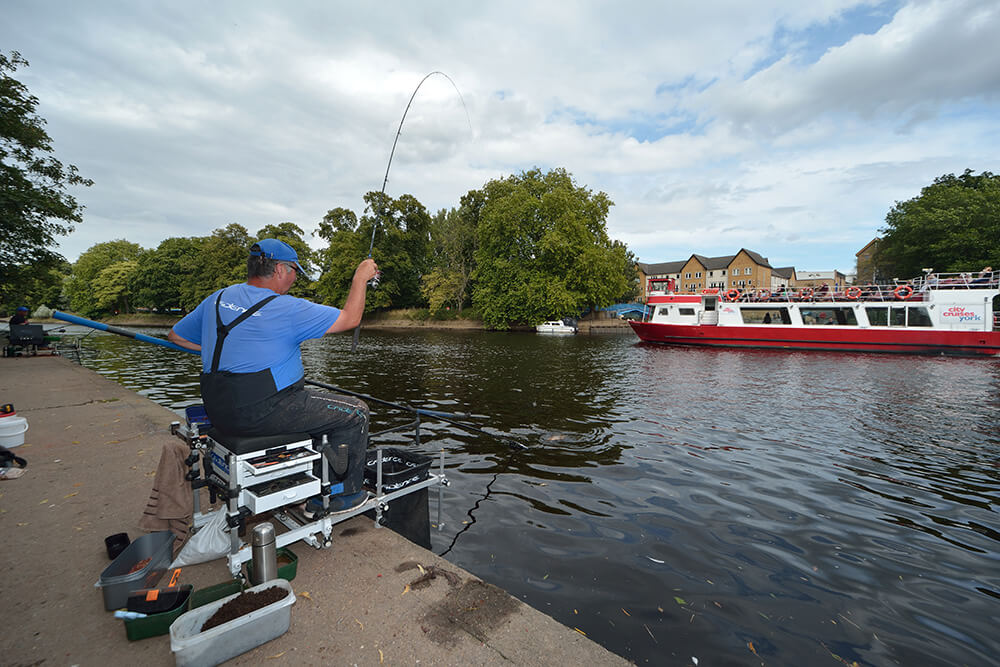 Two-pronged attack, going on the float

A two-pronged approach makes a lot of sense I believe. It can take a while for the bream to show, so in the meantime, I like to try and tempt some of the ‘pukka’ roach, perch and hybrids which also live here in good numbers. With that in mind, I am going to set up a Cadence CR10 15ft Match #1 Rod. The length at 15ft will give me full control over the depth, and I’ll also be able to keep the line behind the float with ease if the wind increases in strength. The CR10 15ft Match #1 version has the softest action, but that doesn’t mean to say it can’t handle big fish, it certainly can due to progressive action. What it’s good for is using fairly light lines and hooklengths. Using something like a light 0.10mm hooklink won’t see you bumping fish off for example, and if I hook something larger, I know the rod will cope admirably. I’ve coupled the rod up with a Cadence CS8 reel, a lightweight option making the paring a pleasure to fish with.

The rig is pretty simple. Perhaps the main focus is actually on the floats. These have a body up shape, designed perfectly for river fishing but the special thing about them is that the stem can be removed because there is a hole down the centre of the body. This means that just by detaching the float rubbers, you can pull out the stem, with the antenna attached, and replace it with a different colour. Why is this useful? Well, simply because the reflection on the water can make it tricky to see the float under varying light conditions. My general preference here is for yellow. 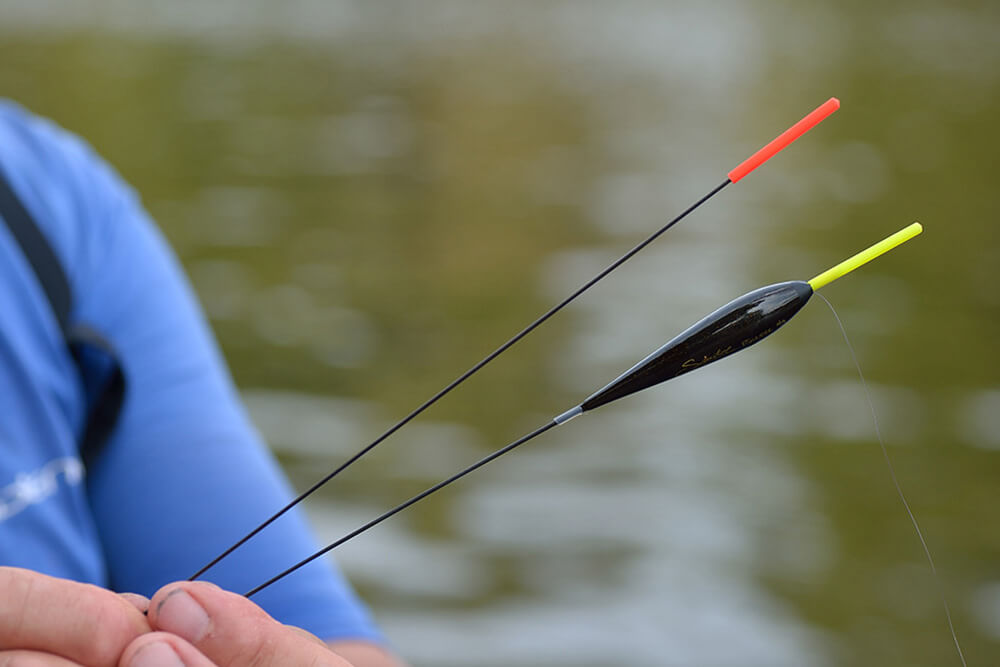 The float is shotted with a 3-gram olivette. I’ve set this around three feet from the hook, with three dropper shots spread evenly down the line to give the hookbait a natural fall in the final third once the olivette has taken it down. With several balls of groundbait introduced at the start, it’s bound to attract the smaller fish first before the bream hopefully move in.

For hookbait on the float, I tend to prefer a single caster, double red maggot, or I might even try worm for perch if they show in numbers. I’ll tend to give the float maybe a couple of hours and today it has brought me some decent small fish such as roach and hybrids. Catching these gives me the confidence to switch to the feeder. 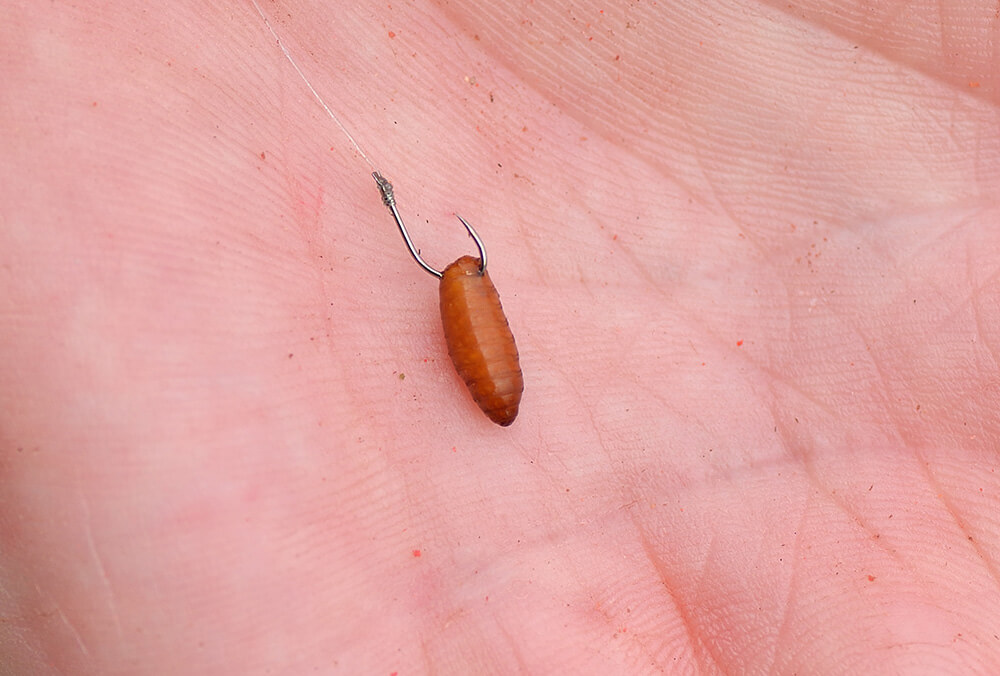 Loose feeding on the float is accomplished with a catapult loaded with plenty of loose hempseed and casters. However, I won’t feed every cast, just every five to ten minutes in an effort to keep the bleak at bay and drive the better fish lower in the water where it’s easier to catch them. 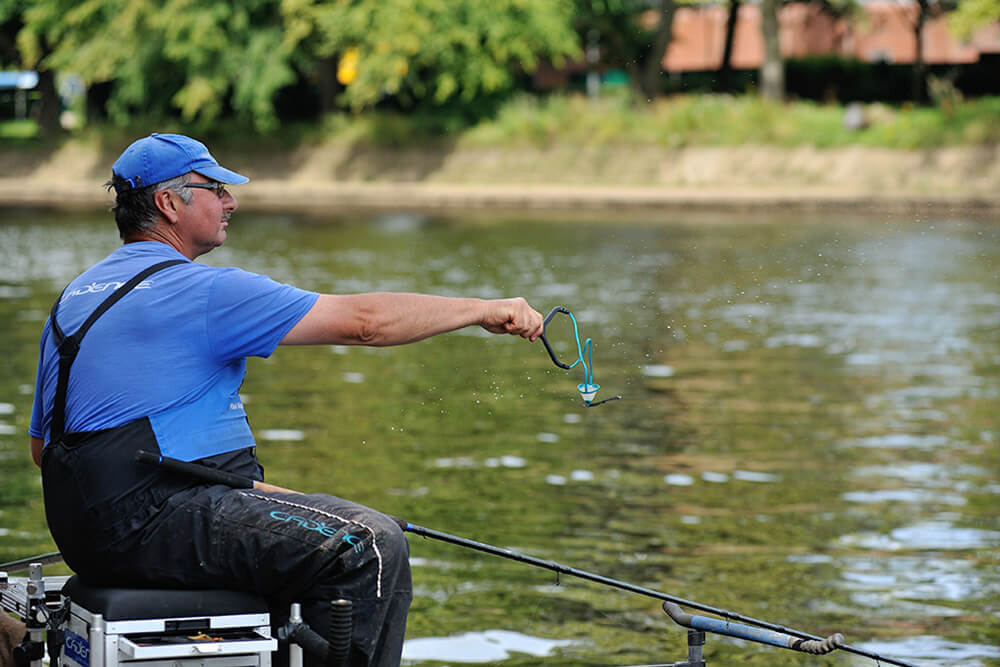 Rod choice is the Cadence CR10 11ft Feeder #2. Now that might at first seem a bit insubstantial, but as I mentioned, the river Ouse here is sluggish and I am not casting much more than four-rod lengths out, so I don’t really need a beefier rod than this. It will easily cope with big bream, and they range from 2lbs to 7lbs here on the Ouse! I’ve added a Cadence CS7 reel to the rod and I suggest a mainline around 5lbs.

The cage feeder is set on a paternoster link of around five inches and you will see from the picture that the knot creates an effect whereby the line to the hooklength stands proud and that will almost eliminate tangles. Dead simple! Tail length can vary from a foot to four foot, depending on how the fish respond. 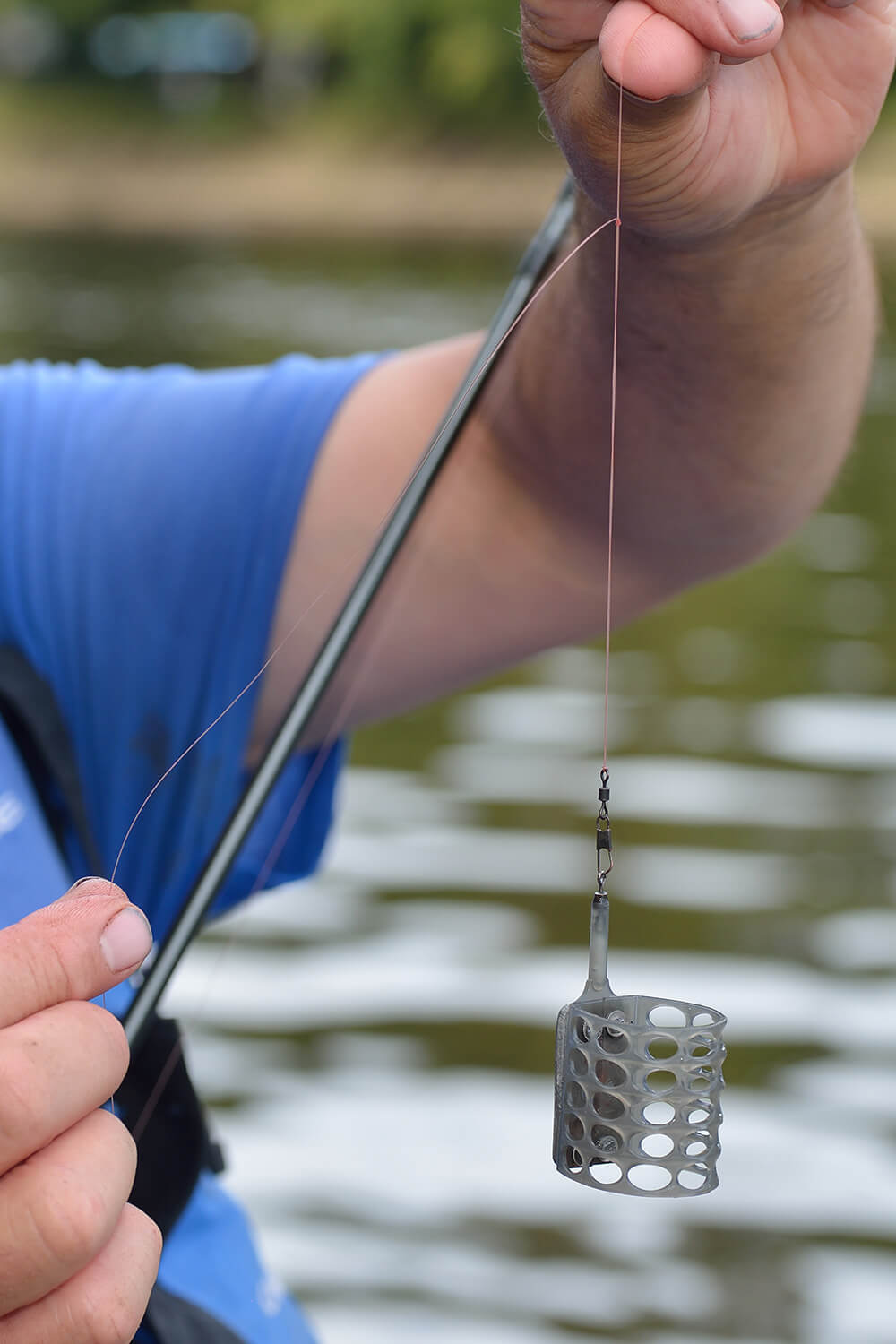 Hookbaits for bream are the traditional options such as worm and maggots, redworm and caster, and one you perhaps may not have tried, but one certainly worth trying, and that is triple dead maggots. Why? Well, they won’t bury themselves into the mud which is very important. Having said that, I will also try live maggots of course, because they do catch the bream.

Groundbait for the bream is a mix with which my pal Steve Edson has been catching very well on recently, especially in Ireland where he won a festival with bream. Its colour may intrigue you, it did me too! However, the bright red/orange combination of Evolved Baits Commercial Red and Evolved Baits Natural Orange seems to be highly enticing to bream! Don’t ask me why just try it!

Chopped worms play a big part and I add fresh bait to my feeder as and when I recast. Chopped worms, casters and dead maggots are trapped between two plugs of groundbait in the feeder and that will go straight down to the deck and release all the goodness bream seem to find hard to resist!

The earlier introduced groundbait balls have certainly brought the bream shoal around, and I’ve been catching some quality specimens to four and a half pounds. They scrap really well in the flow and playing them on this relatively light rod is a very enjoyable exercise indeed! 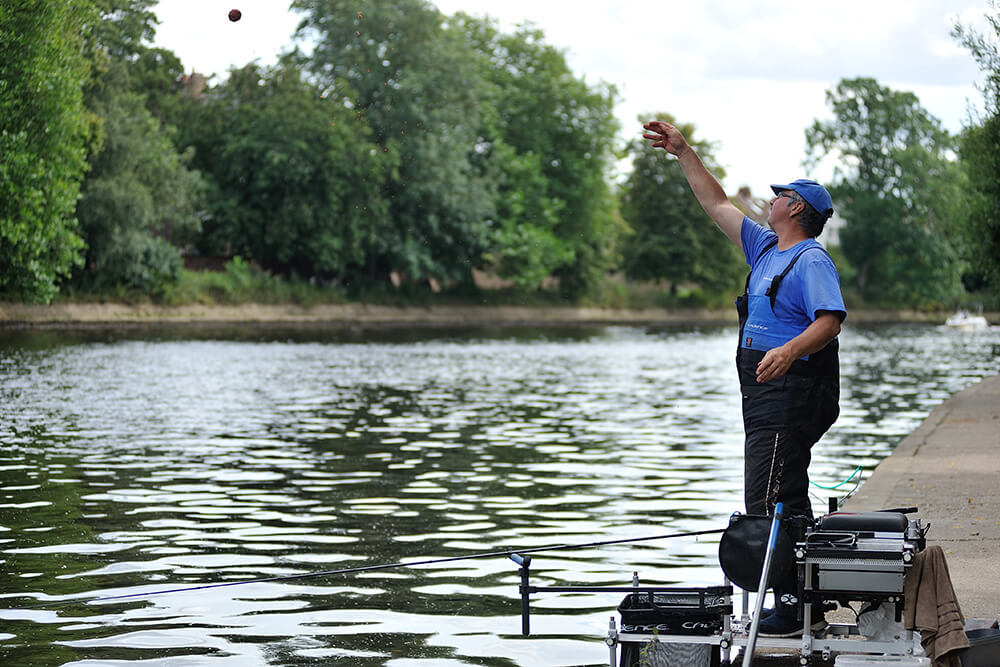 Well, that was a cracking session on the Ouse. It is free fishing, the only thing is finding a parking place, but there is a car park at Rowntree Park. I’ve had around 40lbs, the bulk of which has come to the feeder in the form of quality bream with a static form of presentation on the feeder. I’ve had better sessions on the float here, but it’s hard to resist chucking the feeder for bream in all honesty. Well happy with that! It just goes to show what excellent sport can be had fishing in the middle of the city of York, why not give it a try if you live nearby?