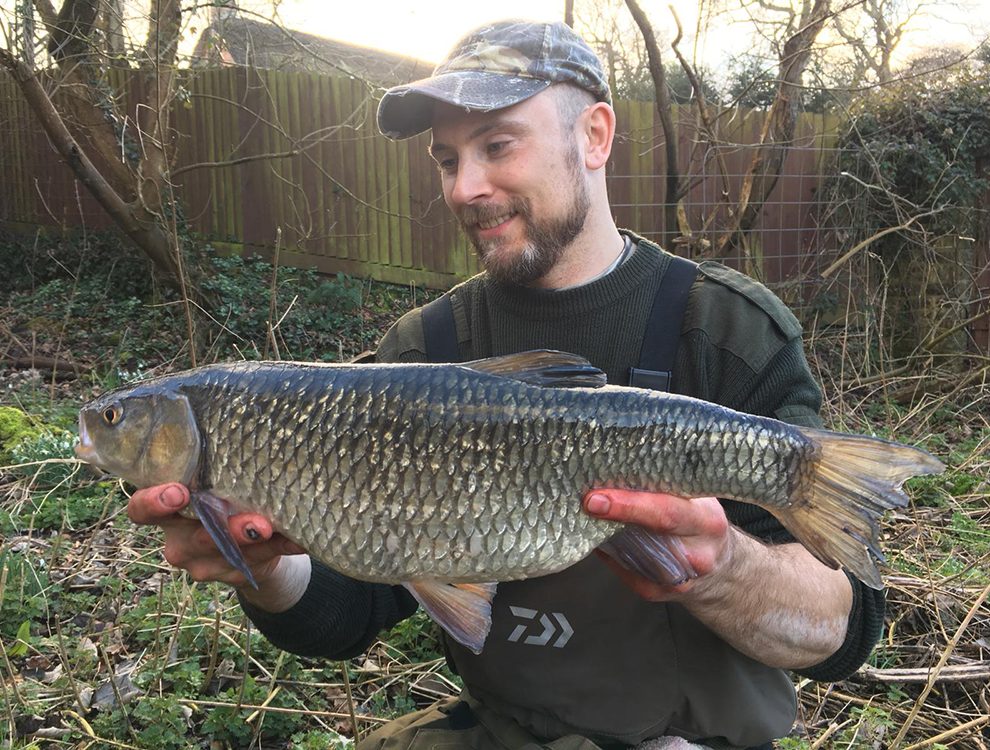 
After another 20mins of heavy and consistent feeding, I hooked and landed a 4lb 11oz chub. This was a fish I recognised (by its mouth deformity and split left pectoral fin) as being a fish caught the day before from the same swim on a trotted red maggot.
Shortly after this fish, my friend arrived to watch. As we chatted and enjoyed a good catch up, we both watched the float disappear and witnessed the rod curve heroically as the hook set into something a little bit special. The fish didn’t really budge and just stayed very deep, inching left and right in the heavy flow. Very slowly I managed to encourage it upstream with gentle pressure and delicate winding, and it seemed the fish was willing to listen to my side of the argument. Sadly it seemed the fish was rather unimpressed with my point of view and decided to show me who was in control, charging off downstream and retreating ten yards past where I hooked it. The fish made its point well, and I wasn’t too arrogant not to appreciate what it was telling me. I accepted that the pains in my right shoulder and wrist were not going to be alleviated any time soon.
My friend offered words of encouragement and reminded me of the lack of snags in the peg. With continued pressure, I was able to start gaining line, and it wasn’t long before my friend saw the fish just below the surface at his feet. I was jabbering on about some previous fishing incident, and he abruptly told me to, ‘Concentrate on the fight, you want this one in the net.’ When someone who has fished the venue for years (and has had numerous 7lb+ chub and a personal best of 7lb 11oz grace his net) tells you to concentrate you know you’re playing a fish you don’t want to lose!
Eventually, the fish came further upstream, almost in netting range. The rod had an elegant curve but had plenty of power in reserve. Had I been fishing with a bigger hook and 6lb line straight through I know I could have applied a load more pressure on the fish. As it was though, with an 0.11mm hook link to a size 20 the rod was delicate enough in its action to absorb the weight of the fish and the current without straining the tackle beyond its limits. The fish came gradually in range, and with a swift lift, I watched my friend engulf the body of a huge chub safely in my net. He looked up at me and asked “What’s your personal best?”, “5lb 7oz,” I replied., “Well not anymore, you’re gonna want to weigh this one!”