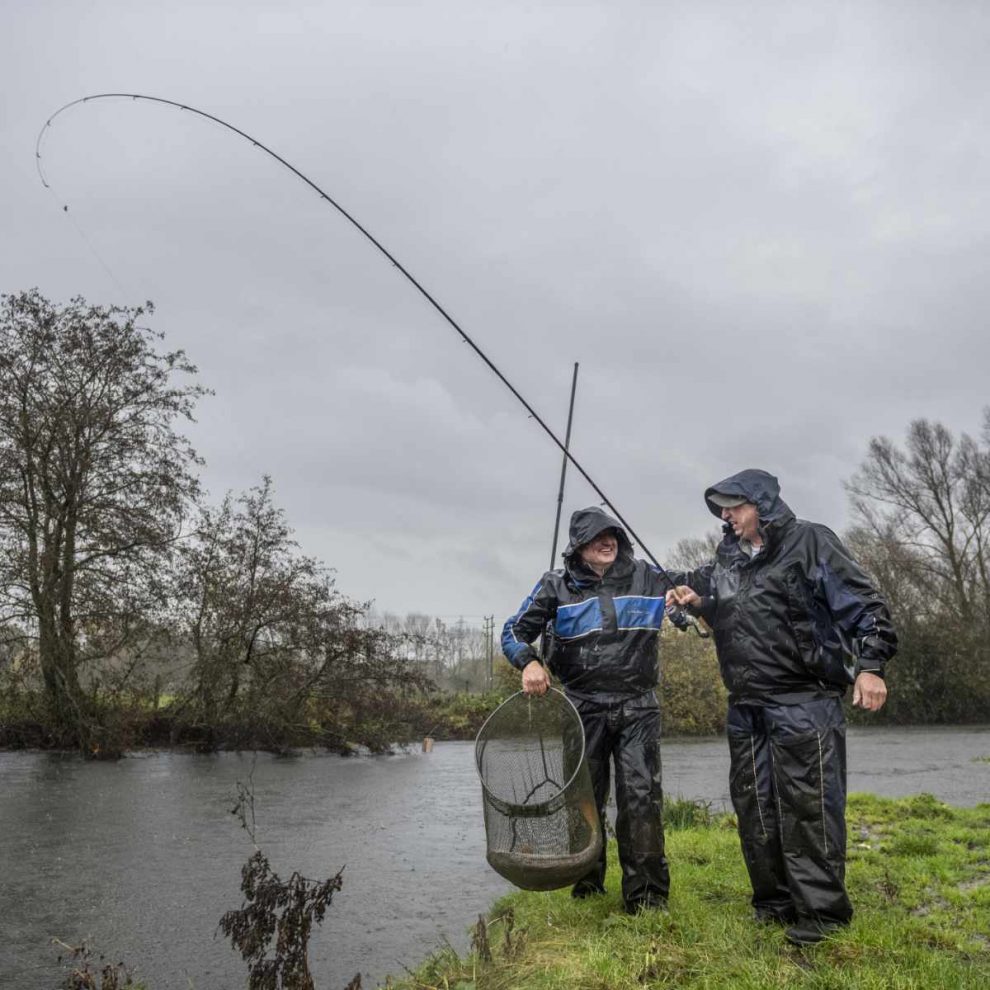 We join Andy Burt on a very wet and windy River Test as he puts the new Cadence Specimen Rods through their paces! Andy has been fishing with various incarnations of these rods right through the near three-year development stage.

Time flies is the saying, and it is undoubtedly the case with the new Cadence Specimen rods, almost three years have passed since the concept, first prototypes and now the final samples. We were busting to get out and give them a rigorous workout and get a few pics.

In the UK we have several iconic rivers, and it was obvious, where better to test than the River Test? We had a date booked, and lucky enough covid guidelines allowed a window to open and off we went!

The first thing to beat was the weather!

The day itself could not have been any worse weather wise, but it seemed only to add another dimension and challenge to our day. When things get uncomfortable (22mm of rain fell while fishing in a gale-force wind) to be at your best requires discipline to stay dry and comfortable. If you’re wet you will get cold and cold means mistakes happen, knots aren’t right, you didn’t change the hook, and you don’t try different things to get a bite. Your concentration lapses and things go tits up!

Confidence in your kit and ability come next, one less thing to worry about. It is true that the most important pieces of kit are the hook and hooklength with the knot joining the two being the weakest link, the likely failure point. Care must be taken to select what is appropriate and knot it properly. However, the term balanced tackle is crucial.

I don’t like losing fish and want to use as heavy a set up as I can get away with, where the problems occur is when fish – especially chub, need to be fooled into taking a bait in an area they feel is secure and they know every snag. As is usually the case, a balance is needed to achieve a suitable presentation and bites!

The river was already a bit swollen when we got to the venue. I chose a peg that happened to be the longest walk but is usually a banker for a few chub. Here the river narrows, goes around a bend then runs to some bushes, it also contains a fair few snags, a perfect chub swim!

I started on my trusted bread flake on a large float, a 6 gram balsa topped Avon shape just to see what transpired. Too many people make the mistake of fishing as light as they think they can get away with believing in finesse to provide bait presentation. B*****ks to finesse, presentation is about control, the river needs to dictate the course the float takes with the angler adjusting to get it and keep it where they want. Watch a piece of debris go down the river, and the float should take the same course. If you start the trot in the middle of the river when the float gets at the end of your trot, it should not have been dragged into the inside. If this happens, you will struggle to fool the fish into taking your bait. Adjustment means mending the line to keep it behind the float and not to let other currents and the wind take control, aim to keep the line straight behind the float at all times. This is especially important when using a soft bait such as bread so that the line can be mended without removing the bait!

A line that floats is essential and don’t leave home without some silicone mucilin, treat the line by just wiping a small amount on the 3 – 4ft above the float. All the above will be made extremely hard if your float is too small.

Today the river was pushing through a bit more than I hoped and was rising fast. When I have fished here before I have found the best way is to run the float down about two-thirds of the way across where it is slightly deeper and the flow steadier. Most of the fish are caught as the river starts to shallow up toward the end of the peg as it approaches some bushes. Today it was pushing through on this line, and despite constant changes, I battled with both the wind which wanted to blow everything down the river and the water rushing down the nearside. Bites are normally quick to come, but it was not to be. I had been putting a bit of feed right across in some steadier water behind a bush. Here I could just about manage to run the float in a more controlled manner down the peg. It took half an hour before my float buried and a good chub of just under 5lb was bullied to the net.

With a photographer employed for the day to capture the session, it was quite a relief to get a fish into the net.

Chub, as we all know, have a great big mouth ideally situated right on the front of their head in a perfect position to intercept food items or my hookbait coming down the river, I reckon 9 out of 10 chub I catch on the float, the bait is off the bottom. From the photo, we can see how they can easily take in a size six hook and big flake of bread. I do sometimes wonder if on days like today they were out in the main current feeding and my presentation was not quite right or they simply wanted an easier meal; perhaps a static bait or one tumbling slowly down the riverbed – a presentation I was struggling to achieve in the conditions. I tried hard to catch another on the float, another half hour passed, and no more bites came my way, so it was time to try the CR10 Specimen Rod and a bread feeder.

I had chosen to use the 1lb test curve version, the latest incarnation of the prototypes I had used for a few years. For the CR10 Specimen Rods, a more traditional full cork handle has been chosen with Fuji K series eyes throughout. The blank is a dark brown that makes the rod stand out from the norm instead of the ground unvarnished look I find too common and appears cheap; dare I say even lazy? Aesthetics can obviously be a personal thing, and if people like it fine, but why not something that stands out a bit?  The Specimen Rod comes with two tips, a traditional Avon for float fishing or when a quiver is simply not required and a quiver section.

Two push in quiver tips are supplied, a 2 and a 3oz. I chose the 2oz, I could have used any of the tips on the peg I was fishing, but 2oz would be perfect, I hoped when I moved down the section where a lighter approach is often required.

A great match was a CS10 4000 size reel with a diameter 0.23mm line giving a stated breaking strain of about 8lb. The feeder ran between two stops, this offers a semi-fixed type bolt rig but allows the feeder to come away if a fish is snagged.

Hooklength was just two feet of 0.20mm Grand Max fluorocarbon with a size eight Kamasan B920 forged crystal I had added a bit of super glue to the knot for added security. I could always scale down but thought it unlikely I would need to especially given the conditions. It was dull, and a rising river that was quickly colouring up from the torrential rain and some big fish live here. The CR10 Specimen Rod was now about to get its first and very serious workout!

On about the third cast the tip bounced back in a typical chub fashion. I wound down and tightened up, pulling back hard to try and catch the chub unaware and guide it away from the far side snags. This worked, and the fish quickly came about halfway across the river before stopping dead. It was now my turn not to react very fast as the last thing I expected was for the “chub” to pull back so hard I had to concede line!

I now realised this was no chub and backwound as slowly as I dare as the fish – I assumed a large sea trout was now heading downstream and out of the pool. I had no choice other than to bring the rod right back around and put the brakes full on!

The Specimen Rod put on an alarming curve, but no sign of locking up. This is where the balanced tackle came in to play, and the steady pressure caused the fish to stop and then come to the surface and roll. By now James had arrived and grabbed the landing net “it’s a carp” he said excitedly. I brought the fish up the peg putting what I thought was an enormous amount of pressure on the rod and end tackle – all performed well. I slackened the clutch slightly allowing me to relax a bit knowing it would prevent a break. The carp made a couple of attempts to bolt off, each time I held firm and the rod took the pressure and stopped the fish. It took two goes with the net for James to skilfully shuffle her in and we let out a cheer.

I am not a fan of carp fishing on lakes, but in rivers, I don’t mind a few, and this one had undoubtedly tested the tackle to the full at the first attempt. I ended up catching another two carp and four chub on the Specimen Rod before the swim died entirely and we moved on.

The chub proved a worthwhile test as I needed to control them in the fast current and prevent them from snagging me in the nearside boltholes once they had been steered away from the far side tree roots and branches.

The CR10 Specimen Rod did exactly what it needed to do. A light enough action in the tip to cast small to medium weights accurately and has a good choice of tips to aid bite detection. The softer tip action means you are not to be over gunned hooking and playing smaller fish then blends into tremendous power in the lower part of the rod controlling the unexpected lump intent on gaining freedom.

I’m certainly looking forward to further testing as the winter goes on. I believe on my more local rivers where barbel are often the target despite being a 1lb test curve I will easily be able to just take the one rod in normal conditions for both chub and barbel. I would only need to go heavier when bigger weights need to be cast, and floodwater flows are encountered.