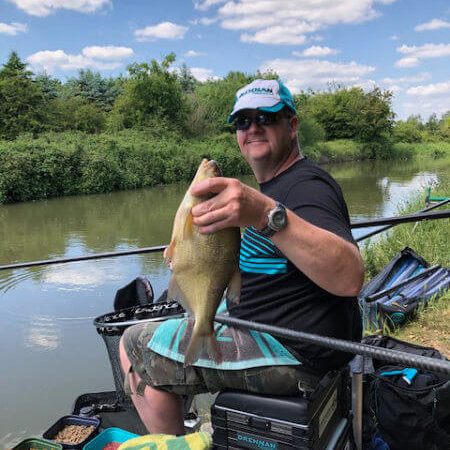 After a long lockdown, Adrian Stokes was looking forward to his first session. Here he looks back at a first productive session canal bream fishing.

With the country in coronavirus lockdown since March and no fishing allowed, I was itching to get out when Boris Johnson finally eased the restrictions and allowed us to start fishing again. I had seen reports of a few bream being caught post lockdown on the Luton AC water, so I decided to have an early start and head to the Stoke Hammond Dolphin Lane stretch.

The alarm woke me up at 5 am, and I was raring to go. I arrived at the canal around 7 am and after a long walk arrived at my chosen swim around 7:30 am. The swim was around 13m wide with a nice covering of brambles and other vegetation lining the far bank.

I decided to plump up four lines, two at 11.5m where it was around 3ft 6in and two at 13m where the depth was just under 3ft, both great depths to fish in. The swims were at a 10 o’clock and 2 o’clock angle, so there was a nice distance between them.

The plan of attack was to feed the two lines at 10 o’clock with chopped worm, caster and dead maggots in a sweet fishmeal groundbait. For the 2 o’clock swim I would go with a mixture of micro pellet with 2+4mm expander pellets. The reason I feed two swims each side is based on past experience of fishing for bream on the canal. The fish will move about and back off your feed when you start to catch a few, so I like to have a backup swim where they can retreat to and have a feed, so they don’t leave my peg and move to the anglers either side of me.

I kick-started the worm swims with two big balls of the mixture on the 11.5m line and then one ball on the 13m line. I also put a good handful of dead maggots and casters in the pole cup. The Pellet swim received a ball of dampened micros and a good helping of expanders on both lines.

My canal bream fishing session started on the heavier 4×12 rig with a bit of worm around an inch long on the hook, and the rig set around two inches over depth and caught some small perch to start. After around twenty minutes I had a skimmer of 12oz then two proper bream around the 3lb mark. The bites slowed up, so I re-fed the swim and put a 6mm expander on the hook and dropped onto the 2 o’clock 11.5m line. The float cocked and went under straight away, and I found myself attached to an angry 4lber. I then caught another five bream on the expander pellet before a combination of boats and the sun coming over the hedge behind me put the fish off.

A change to a lighter rig over the worm line produced some more perch and skimmers to a pound but no bigger bream. I stuck my Cadence CP2000 13m section on and pushed the heavier rig tight over to the brambles where there was some shade with a 6mm expander. Yet again, the float buried straight away, and it was another good bream around 3lb 8oz. I caught two more big bream on the pellet and lost a carp which killed the peg. I tried the 13m worm swim, which produced two big perch between 1lb 4oz and 1lb 8oz and a couple of smaller skimmers before I called it a day.

At the end of this canal bream fishing session, I ended up with eleven proper bream, two big perch and a few skimmers and smaller perch for a total catch of 40lbs in four hours fishing.

The value of having multiple swims proved itself, it was key because if I only had one line at 11.5m and one line at 13m, I would’ve caught but nowhere near as much as I did by rotating swims and not hammering just one swim.

I hope you’ve picked up a few tips on how to attack a canal for bream, don’t be afraid to try pellets, bream love them!