Skip to content
Fishing Bread on the Float for Chub on the Warwickshire Avon
Posted on February 12, 2020 by Andrew Burt 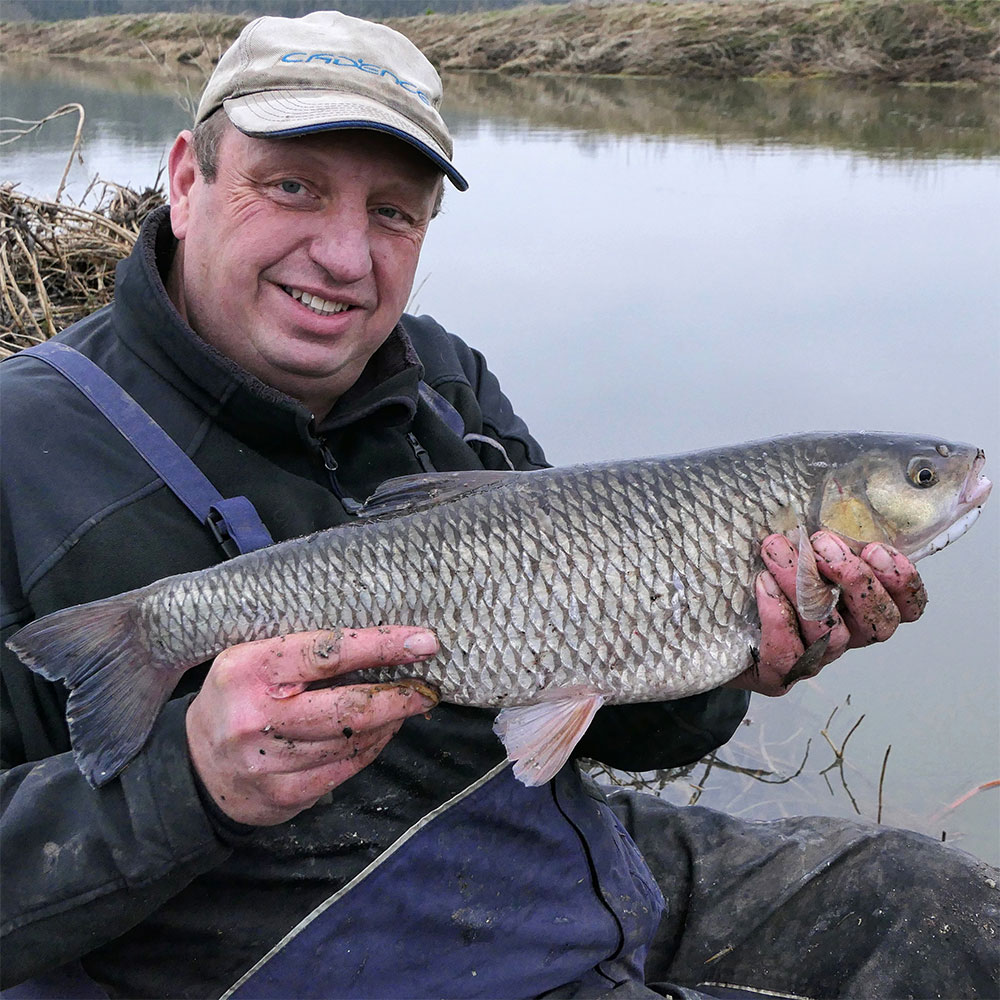 Andy Burt loves the winter and one of his favourite winter pastimes is chub fishing. We join Andy on the Warwickshire Avon where he runs us through how he tackles chub fishing with bread on the float.

My fishing has changed a lot in the last few years. I used to predominantly fish competitions; however, I never lost that “I just want to go out and catch some fish” feeling. Now I am trying to do the things I never did enough of, do the things I love most more, try venues I never previously experienced and generally just enjoy fishing. I had always looked forward to winter, which in my opinion offered the best sport, not always easy and certainly not always a totally pleasant feeling but I did and still do love it.

I don’t necessarily have a favourite fish, it tends to be seasonal, but I do have a soft spot for chub fishing with bread. A great fish that can be easy to catch one day and impossible the next. They know every snag in the river and trick in the book, they’re quite capable of mopping up loose offerings while ignoring the hook bait. They present a challenge.

Although as I said, I do not have a favourite fish, I do have a preferred method, and that involves running a float down a river. I’m quite happy fishing maggot with a stick float or waggler, and in recent years I have fished with bread more and more.

Bread offers some significant advantages over maggot in that it is quick to work.

Using bread means you can travel light and cover more water looking for shoals often catching more than if you had remained static. Staying mobile is a great way to gather information about a venue, where it deepens, where it shallows, where the gullies and holes are. You’re quickly learning where you can expect to find fish such as barbel and when you wish to target them, you learn so much in such a short time.

As I said, you can travel light. On days you may carry a lead rod as well, but usually, it is one rod, not the usual fence I often set up when fishing with maggots. If you are only taking one rod, it needs to do everything. Long enough to control the float, often at range and to cater for deeper swims. Length also helps keep chub out of the nearside vegetation, a favourite trick. It needs to be not too long as to become cumbersome or unbalanced. You may be holding it for a long time.

Years ago, float fishing rods would usually be 12 to 13ft in length. Then came along extensions, extending rods to 15ft. For some reason, although I had access as far back as thirty years ago to longer rods (a Normark 14ft rod), we did not use them. I wish I had! A few years ago, I used a Cadence CR10 14ft #2 Match Rod, and it was a revelation. Everything a three-piece 13ft rod was and the extra foot made such a difference when controlling a float, setting the hook at range and then playing a fish.

Suddenly, I didn’t need a 15fter anymore! For a lot of my fishing, I did want something a bit heavier. As soon as James released the Cadence CR10 14ft #3 Match Rod, I grabbed one!

It is a powerful rod, ideal for chub fishing with bread and barbel too but not such a poker that finer tackle cannot be used if required. The power makes setting a big hook at range easy; you might be using a size 6! This also allows you to keep control in the most snaggy of swims, when a big chub heads for a snag you need to change its intention and get that head out of the water.

The rest of the tackle consists of a Cadence CS7 reel loaded with 5lb line, in this case, Pro Gold. Whatever you use it has to float, use a bit of silicon mucilin or another grease to ensure the line above the float stays on top of the water and comes off easily not impeding the strike.

The float is important. A traditional loafer will easily suffice, but I prefer a thick balsa top, don’t worry the chub will pull it under! Sometimes you will see the float dip a bit as a chub mouths the bait; again, don’t worry they usually bury it next cast. Whatever you use it needs to be big enough to stay on the course of the river and not get dragged of course. If that happens, you may not get a bite!

Stay in control, use the biggest float you can get away with not the smallest, you need to control the float without the bait falling off as you mend the line. In this case, 6 grams, about four SSG, is ample. Shotting is simple, a couple of 2 x #6 dropper shot and a bulk. Put the dropper shot at least 8″ from the hook and the bulk over >8″ above them; this will help stop tangles as the hook cannot wrap around the bulk, for deeper water increase the distances up to 12”.

For chub fishing with bread the hook can be anything up to a size six, I like the Kamasan B920 which is light but a crystal bend and forged so incredibly strong, today as I am using a slightly smaller piece of flake I am using a size eight, this is tied to a 0.15mm hooklength, about 4 1/2lb bs. To put on a piece of flake, I tear off a piece, hook it on in the middle then squeeze it around the top of the shank. Sometimes the hook and bait will float so give it a quick dip in the water followed by a gentle squeeze before casting. It will open back up when it gets in the water.

Groundbait consists of liquidised bread; I like the Morrisons Toastie as it does not go too fine producing an enticing source of loose feed to get the chub feeding, add a little water as you whisk it, this will help it bind and sink, and away you go. Depending on how long I’m out four to six loaves is about right and don’t bother cutting the crusts off, the chub don’t care.

When I get to my peg, I like to get some bread into the swim as soon as possible. The longer the wait, the better as the chub will become less wary as they start to feed on the loose bread. Often a bite will come on the first cast! No bites after half an hour and its time to move on. That is probably an hour maximum in each peg without a fish or a bite.

The only thing left to do now is set the depth and put the float through. You usually will catch off the bottom and bites will come quickly if a feeding chub is there. Often though, the biggest chub will fall to a piece of flake presented just on the bottom. In the picture, the biggest at 5lb 3oz came just like this. I usually fish up to a foot off the bottom and two feet if it is deep or the fish are having a good go. Start by putting in a few balls on your chosen line – often the middle or where there is the most flow, feed a ball a cast for five or six casts then reduce the times you put feed in if no bites are forthcoming. Often a chub will grab the bait if it thinks the supply is diminishing.

Looking for a peg and kicking off!

There aren’t many rivers that don’t lend themselves to chub fishing with bread, and as stated, this is a great way to explore the river. If you want to use a bit of watercraft look for a bit of flow, if the water is slow and deep, the chub will have an age to decide if they want to eat the hookbait and they will often ignore it. In deeper slower areas use a static bait or fish it on the bottom.

Try to find areas where the river shallows over gravel often signified by the remains of weed beds. Finally the obvious, a load of snags – places to hide! A favourite has to be fishing a bend in the river where the flow runs down the far side; chub won’t be far away. Some swims are best described simply as ‘chuby’!

Get in position above where you anticipate catching and get comfortable, put in a ball of bread and watch where the river takes it, this is the path your float needs to take. You will see the ball float for a few seconds then start to sink, and it will sink quite quickly. Gauge the depth and the flow, look to where you expect or want to catch.

Put a piece of bread on and run the float through, does it behave? By this I mean does the line stay straight behind it allowing the float to present the bait as naturally as possible? If not you may need to alter things, the line you fish, the depth, is the bait dragging bottom too much? Is the wind being a pain!!? I always believe if the first foot of line behind the float is in a straight line, your bait presentation will not be far wrong.

Now it comes down to time, as a general rule the smaller the river, the quicker I would hope for a bite as you are not pulling fish in from a large area. You can often go back to a swim and catch by running some bread through without even feeding. Keep moving, keep changing, keep learning and enjoy the winter river chub fishing!