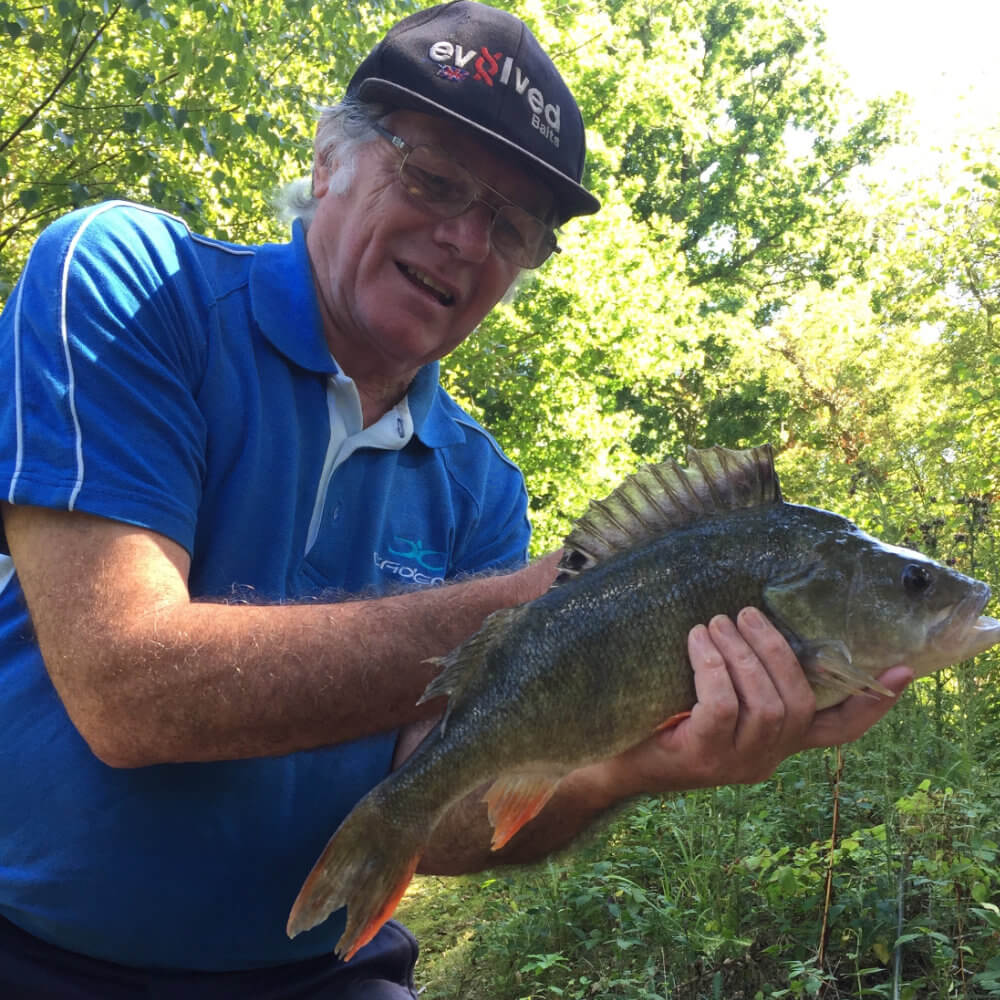 A while ago, almost two years in fact, I had a conversation with James Robbins. Initially, it was about perch after his second placed finish at Riverfest, after seeing his photo which showed he had some nice perch. I said that I often used prawns for a lot of my perch fishing and James replied that he’d never used prawns as bait.

This July my club waters have not been fishing well. In truth, many lower stocked club waters have not been fishing that well down south, it’s also true that many places in June and July never do fish well. Fish are recovering after spawning; generally, light levels are very bright and water levels are low and falling. Combining these with water clarity being like tap water, it can make the fishing difficult. To add another excuse to the exhaustive list, there are also many more people fishing since lockdown.

Fishing With Prawns: The Challenge

So, I set myself a challenge. To see if I can catch fish on a different bait to that being used by the other anglers. Most are fishing the usual “method” tactics, using either pop-ups, pellet, corn, luncheon meat, maggot, worm or bread, so, I opted to use my perch faithful prawns!

A quick visit to Tesco, with my mask in place, to buy a pack of freshwater cooked prawn at a cost of £2.75. To fish these I usually break off the head end, which is the hollow U shape section, I then split the middle and tail section to fish on the hook. I fish baits that are broken on a hair, which is either a bait band or a spike. On a hair, I use a size 14 or 12, usually a Kamasan Animal barbless pattern. If I use a whole cooked prawn, I will use a minimum size 10 hook. Sometimes, I also fish uncooked king prawns on big hooks from sizes 8 through to 2, heavy wire barbel hooks, just in case I hook a pike. If you think these baits are too big for perch, a 2lbs plus perch can easily swallow a 4inch roach. So, on with the challenge!

The swim I’d fish was a bay with some reeds on the left and a bush on the right with an island 30 meters in front of me. I discounted the island due to the gusting wind pulling the float around. I plumbed up and found a good 1.5m at around 14m, in line with the end of the bush. The reeds had around 1.2m inside. I fed a couple of small balls of Sensas Maggot ground bait (a birthday present) to the right and straight out in-line with the bush end, over this I fed a few pieces of broken prawn, a mix of head ends and a few middle and tail ends. I cast out then sat back and had a cup of tea.

After about half an hour a few bubbles appeared straight out in front, so I cast past and pulled back into position. After a few minutes, I had my first bite, a bream of around 2lbs.

Then is started raining, light but steady, with the umbrella in the garage, I was momentarily thankful I was sat under a tree, however as the rain continued and the leaves became saturated and blew in the wind, the tree gave me several nice refreshing showers. Time to go back to the car and get some wet weather clothing, I returned fed again and had another bream around 2lbs.

On the next cast I missed a bite, only a small fish. I cast again and had a nice perch which weighed 2lbs 2ozs. The fish was very skinny, probably post spawning, even though there were millions of fry to start fattening up on in the lake. During the next hour I had two more bream, both near to 3lbs. Then, it went quiet for an hour, as the day went on the rain stopped and the wind relented. A few carp started to cruise around. This coincided with anglers leaving the venue, moaning about their bad day, are they mad? I kept feeding little and often and had three carp up to 6lbs. All fishing with prawns.

Tesco was the first port of call then it was back to the same lake, a different swim this time, towards the opposite end of the lake. The weather was bright and dry. If it ain’t broke, don’t fix it, so the same method and bait would be used – same method, same result?

I started with three more bream all over 3lbs. The breeze was blowing into my face, this pushed a thick scum on the surface, turning the swim into carp city! I’m not joking either, it was hard to get a line in without foul hooking something. It does put a brilliant bend in the rod, and I did land one hooked in the cheek at around 5lbs. Then a mate came along to look at some Cadence rods, so I stopped fishing for around an hour while I explained about the #1, #2 and #3 stiffness and showed him one of each.

Initially, he was interested in the 12ft #3, the one I was using, but eventually settled on the 14ft #2 as he fishes more rivers for chub. Then he went home to order one.

After he left, it was back to fishing and in the bright sun the carp were sifting through the scum on the top. Undaunted, I continued, with the little and often feed with the prawn on the hook. Eventually, I had an eel of around a pound. Then, I started to get regular bites as the fish moved down. I ended up with nice carp from 3lb to 8lb to go with the earlier bream and eel.

A real challenge as I was meeting my old mate Mike Fish on the river to discuss our upcoming holiday. On arrival, he said welcome to blankety blank, “I ain’t ‘ad a bite for two weeks”. After a chat I walked up and down the length, it was choked with weed and not moving and gin clear, the conditions were windy, bright and sunny.

I finally settled on a swim two below Mick, as it was so windy, I chose to fish the straight lead, so out with the Cadence CR10 11ft #2 Feeder Rod 1 oz tip and CS10 4000 reel with DH 6lb Feeder line. The business end would be 50cm of .017 hook length with a size 14 Kamasan Animal hook and a hair.

I continued the little and often feed approach, re-casting at half hour intervals.

At 14:00 we were joined by another angler who had packed up bite less, both Mick and I had nothing either, even though small fish did show occasionally, and Mick was using maggot on one rod. Finally, around 15:00, I saw my tip move about an inch, then a slow steady pull resulted in a perch again which weighed 2lbs. Mick claimed it was the seventh he had heard of over 2lbs this season. This turned out to be the only fish caught on the river that day, fishing with prawns can give you the edge on these really hard days.

Tesco, then back to the lake, this time to fish the middle part. I deliberately found a swim between two other anglers; they were both using two rods and had caught a couple of carp each. My swim had a reed bed across and nice bushy cover on each side. I chose to fish short, then, while setting up, the guy on the right-hand side started packing up, saying he had not had a bite for three hours and was going home. He walked past me and started to chat with the guy on my left. I enquired whether I had upset him as I had sat between them. He assured me that he was packing up anyway and had been fishing since first light.

We then started to discuss the fishing and tactics as it became apparent both were new club members and wanted to know more about the fishery. As generally happens with “chatty” go fishing, give back Chatfield, we lost a couple of hours. I talked about Cadence and Evolved Baits and finally, what I would be doing that day. Both were astonished by my prawn baits!

They both wanted to know how I fish them and watched me for a while. I was also startled by what happened after my first bite, it resulted in me netting a large perch of 3lbs. This fish was hollow and could easily achieve close to 4lbs, in the winter.

I also lost a good carp which looked well over 8lbs. The hook length parted, on inspection, it looked damaged from an earlier snag. Lesson learnt! Always double check your rigs. To cut a long story short, I had a further eight carp and another eel.

Fishing with prawns, I have caught some good fish. Although not caught this week, the mirror carp in the picture below went 23lbs, caught on prawn in the winter months. Mis-quoting Roy Keane, they’re not just for the sandwiches in the director’s box at Old Trafford. Try them yourself, I think they work well.