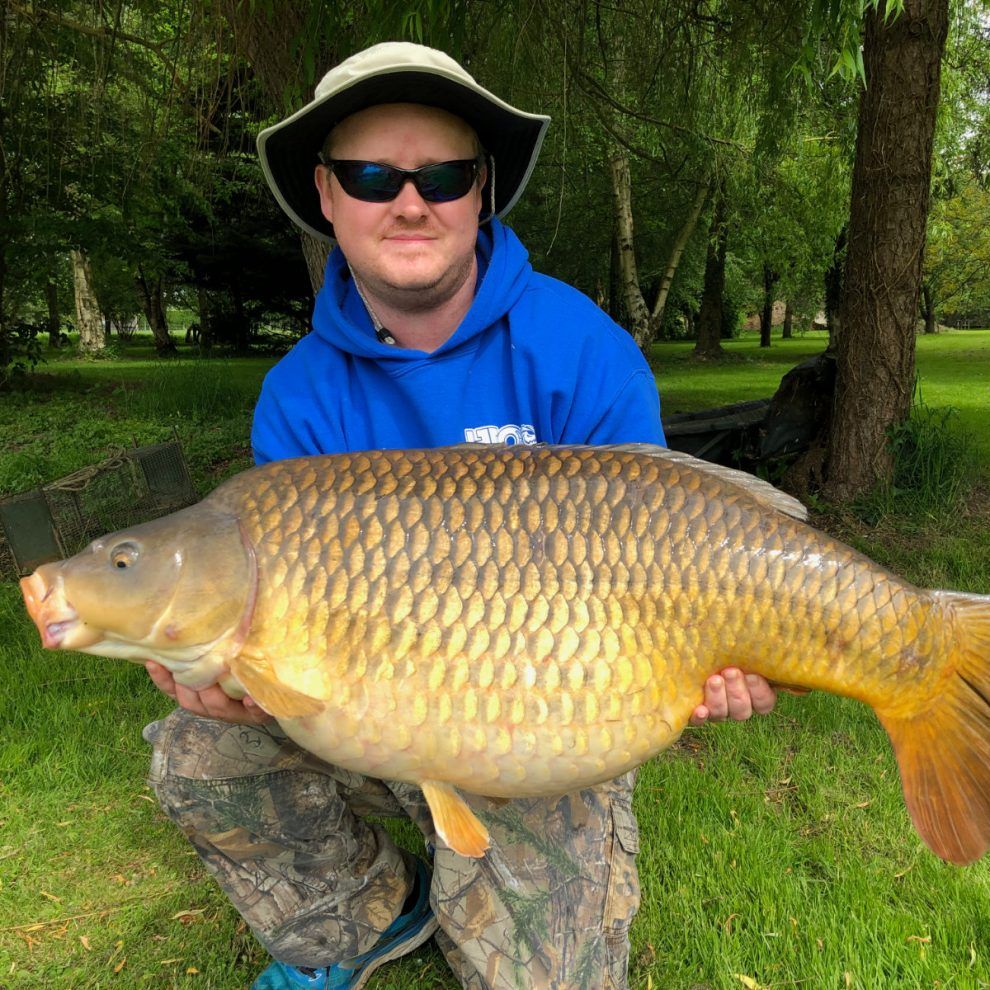 Once upon a time we could travel unencumbered around the globe in pursuit of fish. It was 2019 when I last ventured abroad for some fishing, an annual trip with some friends to France in pursuit of carp. A couple of months before this I stopped by to see James, after the traditional curry and a few crisp Cobras, James mentioned that he had the new CS10 5500 Long Cast Reels in and since I was soon off on my travels, did I fancy having a play? It just so happened that I had invested in some 10ft rods for this trip and had yet to decide on which reels I would go for, so, a perfect opportunity presented itself.

The trip was in late May. We had picked a beautiful four-acre lake in the Pays de la Loire region, perfect to share between three anglers, it has a good stock of fish up to mid-forties and is known as a bit of a runs water. The lake itself is quite open, with a large island towards the far shore, this creates a narrow channel of around twenty-five feet wide at the back. After walking around the lake, we all decided to pitch our bivvies on the bank furthest away from the island. The island is populated with tall trees, this would keep the narrow channel sheltered through the hottest parts of the day and gave us somewhere to fish when the main swims were unproductive.

Usual form on these trips dictates that bite time is between 5am and 10am, once the sun starts to rise above you, the fishing is killed until later in the evening. While there is a tendency for anglers on these venues to keep lines in the water all the time, I tend to rest my swim during the day. These are pressured waters, and, in my view, it is more productive to give the swim some recovery time while the chance of a bite is minimal. I will pull in all my rods around 11, have a bacon sandwich and a coffee while contemplating what to do. On this venue it was an easy choice, kick back and chill for a couple of hours and then head around to the narrow channel!

From Saturday night to Monday evening, I was confined to my bivvy. Saturday had been a cracking night, with a couple of cold ones consumed while admiring my handy camp building skills. Sunday afternoon was perfect. Fishing, a couple of beers and listening to my beloved Sheffield Wednesday play their last game of the season via the wonders of the internet. However, from Sunday evening it proceeded to pour down for the next two nights. With these conditions I stayed put. The fishing was quite good though, with seven fish landed to 34lbs 7oz.

A glorious Tuesday dawned and as I fired up the stove for the first brew of the day, I already had designs on hitting the narrow channel in the afternoon.

After a quick visit to the local patisserie the clock had swung around to half past two and I decided to have a wander to the narrow channel.

This would be the first outing for my new 10fters, which were 3lb test curve and would be coupled up with the CS10 5500 Long Cast Reels. Due the nature of the narrow channel, which had plenty of overhanging branches and bits of tree root growing in around the margins of the island, I wasn’t going to take any chances. The reels were loaded with 0.40mm fluorocarbon. I favour fluorocarbon for this kind of fishing as it sinks like a brick and has good abrasion resistance, perfect for fishing around snags.

My usual method for targeting fish in this manner is to use a single hook bait. But with the overhanging trees and general debris around, I instead decided to fish with small solid bags. Lake rules required the use of 80cm of tubing, which was threaded onto the mainline with a Korda Solid Bag Tail Rubber added to a 2.5oz inline lead with the remaining mainline attached to a size 8 swivel. The rig was my go-to solid bag rig, 4inches of braided hooklink which I tie a large loop in, around half the length of the hooklink. This means I can replace the rig easy by loop to looping it to the size 8 swivel and it acts as a bit of a boom too. I fish with a size 4 Nash Claw Hook with a kicker. It is rare I use a hair, so instead, I use a plastic bait screw and a hook bead to keep it all in place.

Filling solid bags can be a bit of an art form and there are many ways to do it. Personally, I like to keep them small and compact and will use a combination of different sized pellets and boilie crumb. Pellets wise I use Mainline PVA and Spod mix, this is ideal as you get every size of pellet from 1mm right up to 5 and 6mm combined.

There are many ways of tying a PVA bag, I use a simple method many of you will be used to seeing. I add a bit of mix into the bag and then place the hook bait into the corner. I then add some more mix and using the lead I tap all of this down before placing the lead dead centre in the bag. The rest of the bag is filled up with mix until around a third of the bag is left empty. This third is “licked and sticked” around the Solid Bag Tail Rubber to finish off the bag. I’m casting short distances, so there is no need to be belt and braces and tie off the bag with tape. These bags are quickly made and given the distances involved, there is no need to be overly neat and tidy! Hookbait wise, I find a high attract, pink, is a great choice. I must admit to not being a massive fan of pop-ups, I’ve never felt confident with them, so I chose a 12mm Nash Citruz Wafter in pink.

Instead of going in gung-ho, I decided to setup my chair back from the water and watch for a little while. Scanning the margins of the island for any movement. One area sparked my interest. It was an area where a branch juts out from the island and sinks down into the water. I made a mental note and kept scanning. My eyes were immediately diverted back to the spot where the branch juts out. A little movement of water on a calm day, could it be a fish? I kept my eyes glued to the spot waiting for any other signs, then I saw the foliage on the water line move, then the branch moved, then a swirl on the surface. It was a fish!

I picked up my rod and crawled towards the water’s edge, not wanting to stand up and break the skyline too much. A little underarm flick with the solid bag and it landed a foot away from the branch and the island margin. I let the line sink, set the clutch tight and waited.

I barely relaxed before the rod tip began twitching and the rod locked up. Still holding the rod, I struck into the fish. When fishing tight to margins, I try not to rely on playing the fish on the rod straight away. As soon as I strike, I stand up and start to walk backwards to ensure the fish moves away from any structure, in this case, the island margin, as quickly as possible. The fish was soon away from the margin and started to cruise left, with each kick of the tail, the carp attempted to get back into the margins and the snags, but the rod was holding firm and the drag on the CS10 was making sure the brakes were well and truly applied. Walking down the bank I led the fish into some open water. The explosive start to the fight was over, so I relaxed the drag ever so slightly and started to play the fish out. It was clearly a decent sized fish, its back had broken the surface a couple of times and it looked big, but I was still unclear just how big it could be.

Out in the open water the carp kited towards a bed of pads, putting a bit of extra strain on and tightening the clutch slightly, it came away from there and back out into the open water. The drag on the CS10 taking the strain, it has a good start up inertia, so it’s not jagged or sticky, it allows line to flow out smoothly, and this reduces any chance that the hook might pull. The runs started to get slower, and the fish was clearly getting tired. I saw an opportunity. Sinking the net into the water I played the fish to the net, backing off the drag as it got closer. Bringing the fish over the net, I lifted it and the fish was secure. The adrenaline still pumping, I peered into the net and looking back at me was a scale perfect common carp…a big one at that.

Hearing the commotion, I was joined by my friend Paul, his first reaction was to say something I can’t repeat here, and the word “chunk”. Keeping the fish in the net, I grabbed the carp mat and weigh sling and gave them a good soak in the lake before setting them down and quickly zeroed the scales. We lift the fish up and placed it in the weigh sling, hooked the scales on and watched them bounce around to 42lbs 7oz. An absolute machine of a carp and one of the biggest in the lake. After a couple of quick snaps were taken, I gently released the fish back and got a soaking as its tail smacked the water as it swam away.

I had my doubts after such a commotion that I’d catch any more fish in this swim. There was still plenty of time left though before heading back to the main swim, so I cast out again, this time I chose a spot twenty feet to the right of where I was fishing. Again, the rod having only just been cast in was off again. This time it was only a small common of 8lbs, but good fun none the less.