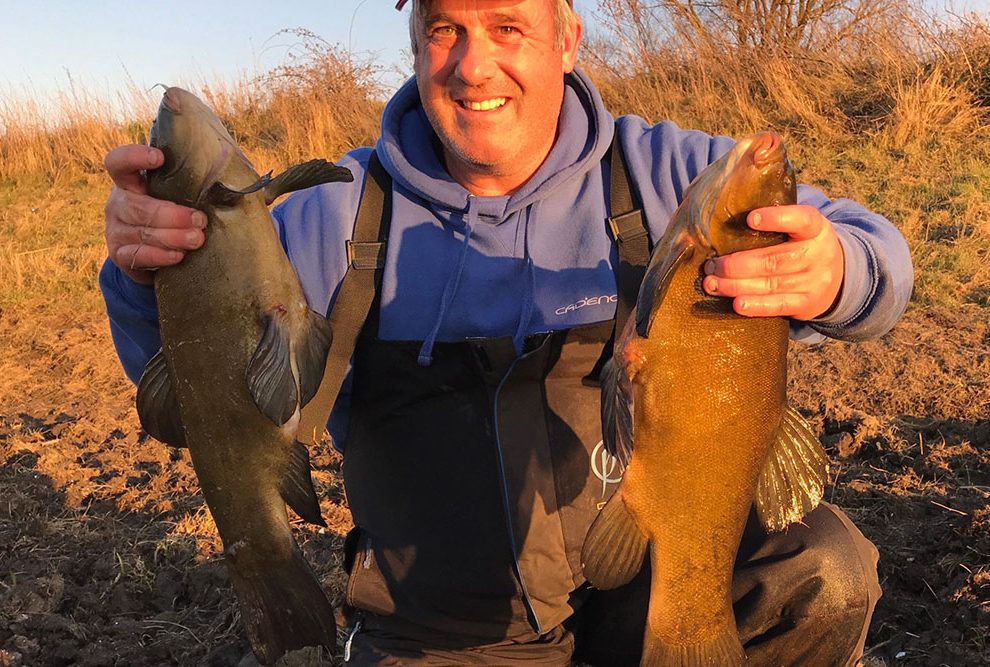 Every now and again, a session comes along that will stick in the memory bank for years to come, and my latest trip out on the bank proved just that.
My venue of choice was the mighty Relief Channel, a vast expanse of water that is 10 miles long and can be up to 100m wide in places. The area I chose to fish has held a big shoal of bream towards the end of the season for the past couple of years, with this in mind, I set about tailoring my attack to suit.
With minus temperatures overnight I encountered frost and dead still conditions upon arrival. The task at hand wasn’t going to be easy and I fully expected to struggle.

My rod of choice was the Cadence 13ft #3 Feeder rod which I matched with a Cadence CS8 reel. The venue is sluice gate controlled, where the level can rise or fall at any time. This can alter the pace of the water, changing the weight of the feeder is commonplace, and when casting anywhere up to 60m is required, I needed the extra power that the #3 possesses.
With all of this in mind and knowing this peg holds fish to a decent size, I went for the 3oz tip with 6lb mainline loaded on the Cadence CS8 reel, to the mainline an 8lb shock leader completed the setup. The shock leader would help when punching a fully laden feeder out into the swim, reducing any chance of a crack off. The length of the shock leader is one length down the rod, one up the rod and then three turns on the reel. This means that I’m not only casting with the shock leader on the reel but also playing a fish up close with it wound on the spool too. This gives me a good cushion when landing fish. 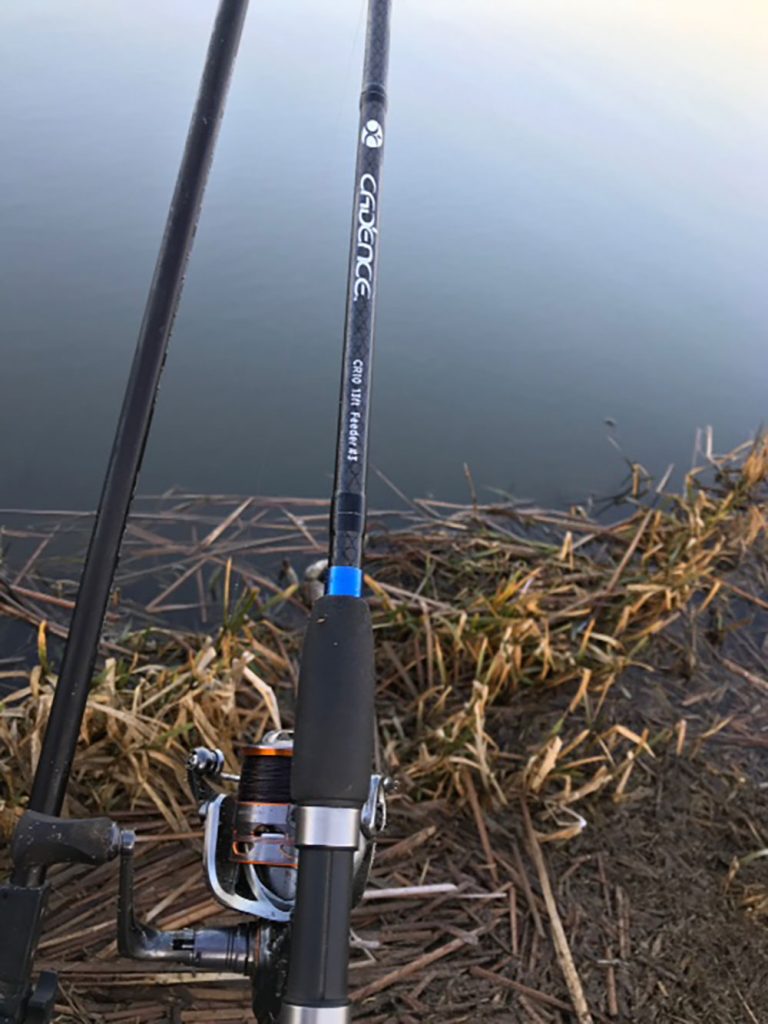 With big fish being the target of the session, my chosen groundbait mix compromised of a bag of BaitTech Omen, 3/4 bag of BaitTech Kult Carp Sweet Fishmeal and two pints of brown crumb. I mixed this together the night before the session with the addition of BaitTech Sweet Liquid Molasses into the mixing water. This may sound a fair amount of groundbait for this time of the year, but this is a big water that hasn’t seen any or much bait for a few months and should the fish be there, they can soon mop up the bait.
By mixing this amount the night before, it can soak up a good amount of water, so I like to separate the mix into two buckets and mix separately, adding an equal amount of mixing water to each. Once the desired texture has been reached, I leave it 30 minutes and then mix again as all this water will have been absorbed. The following morning, I just tweak the mix to suit, and I’m ready to go.
The hook baits were simple, worm, dead/live maggots and casters. 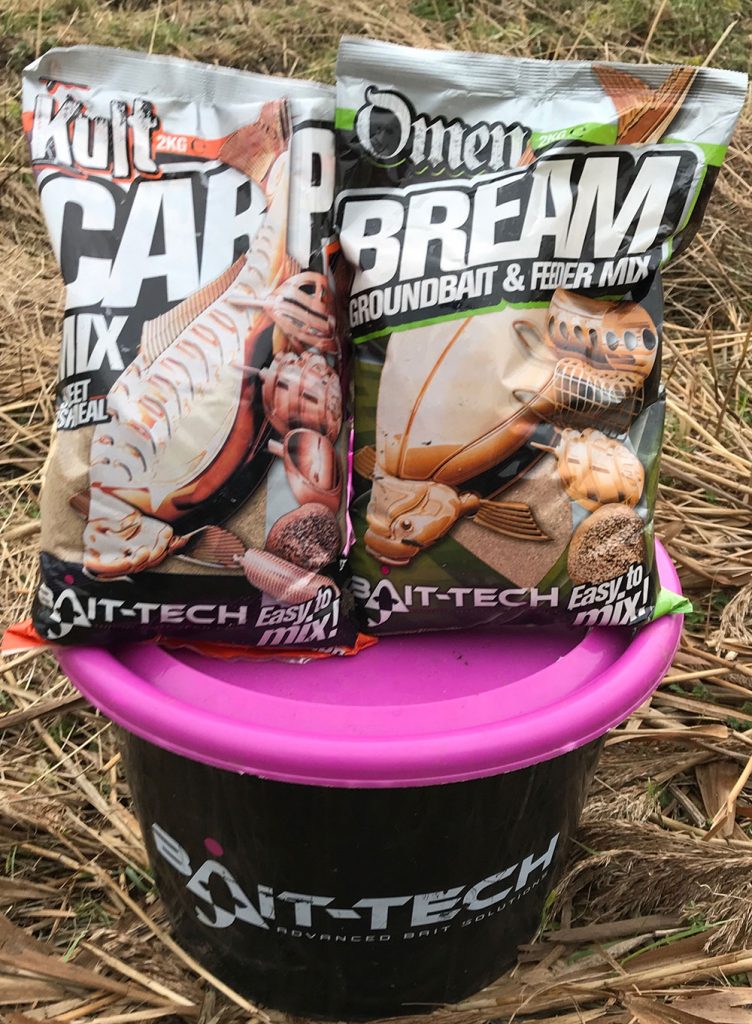 For most of my feeder fishing on rivers, the rig is the same. It consists of a two-inch running feeder link that runs down to a line stop, this is resting on a twizzled loop with a quick change swivel bead for the hook length attachment. The twizzled loop below the feeder creates a stiff link which keeps the hook length away from the feeder, when casting this aids in the prevention of a wrap over or tangle. This is useful when casting distances and in windy conditions. Onto the quick change swivel, I am using 28 inches of 0.14 diameter line and a strong size 14 hook. 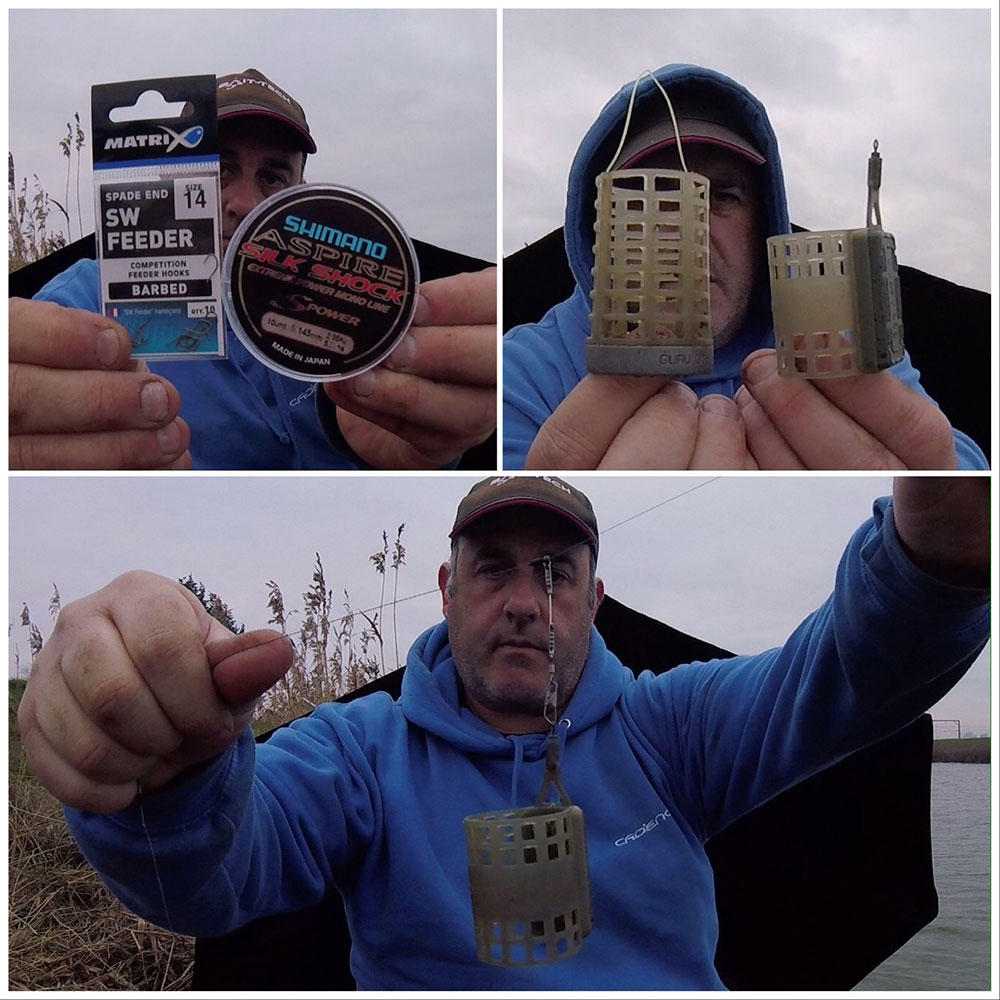 To kick off the swim, I fed 20 big feeders full of groundbait at around 40/45m, containing chopped worm and caster, before slipping on a large ‘plug-it’ feeder to start the session.
To see if I could get an instant response, I began with a single worm and maggot hook bait, after an hour this had produced nothing, and I changed to a double worm. This brought an instant response, not a bream but a lovely olive green tench. I was off the mark sooner than I expected. Much to my surprise, the next cast produced another tench!
Throughout the remainder of the morning, I caught eight more tench with a total of ten by the dinner time. Another big surprise was the capture of a sea trout, which led me a merry dance up the bank, another new species to my list, which I’m incredibly chuffed about! 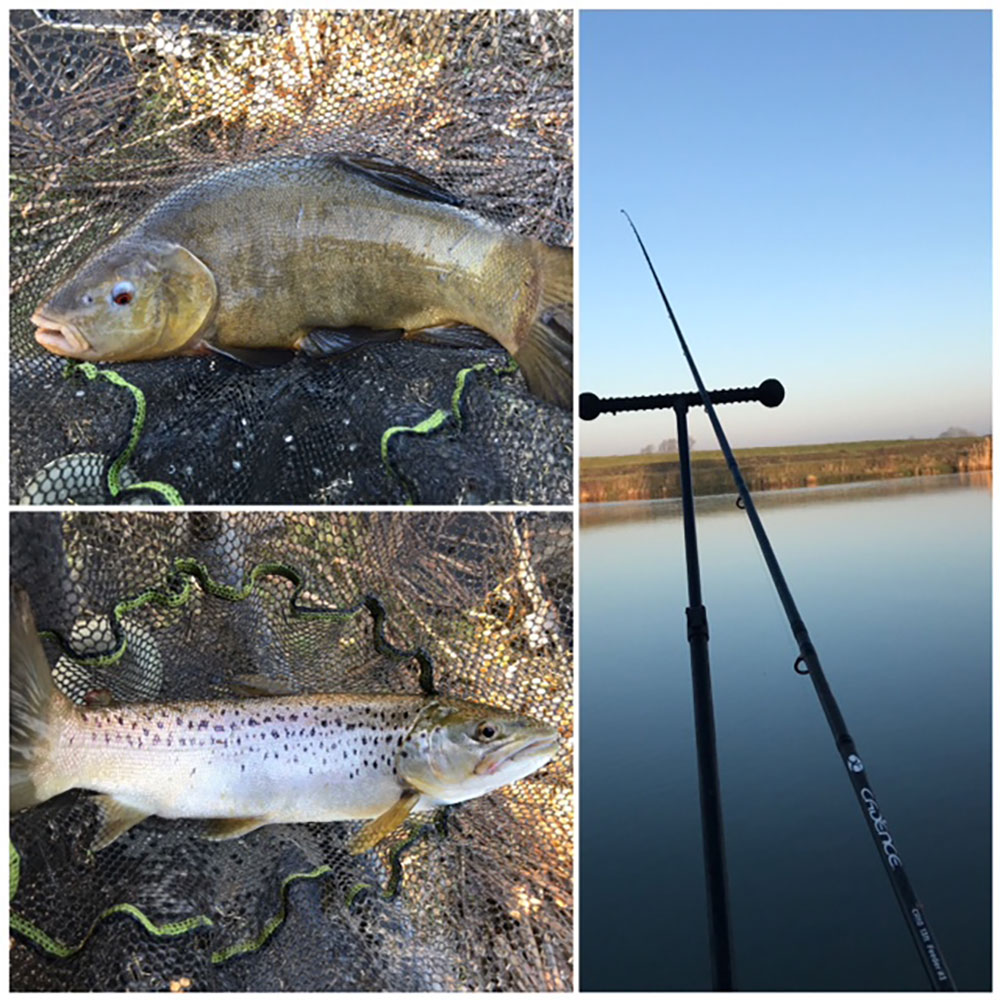 After dinner time the bites had eased a little with only the odd indication. I made a choice to feed eight more full feeders of groundbait into the swim and then rest it for 15 minutes while I had a bite to eat with a friend who’d dropped by for a chinwag.
This re-feed definitely had the instant response I was going for, within five minutes of casting back out the tip soon dropped back and I was into tench number eleven. The afternoon session couldn’t have panned out any better, as the tench gained more confidence over the feed I was picking up one or two in little spells.
I ended the session just before 4pm by which time I’d managed to bag twenty prime river tincas, all of which averaged around 5 to 7lbs. A bag of well over 100lbs!
When we got the fish out on to the bank, I could only look in awe as to what I’d actually caught. We got some quick pictures before safely returning each one to fight another day. 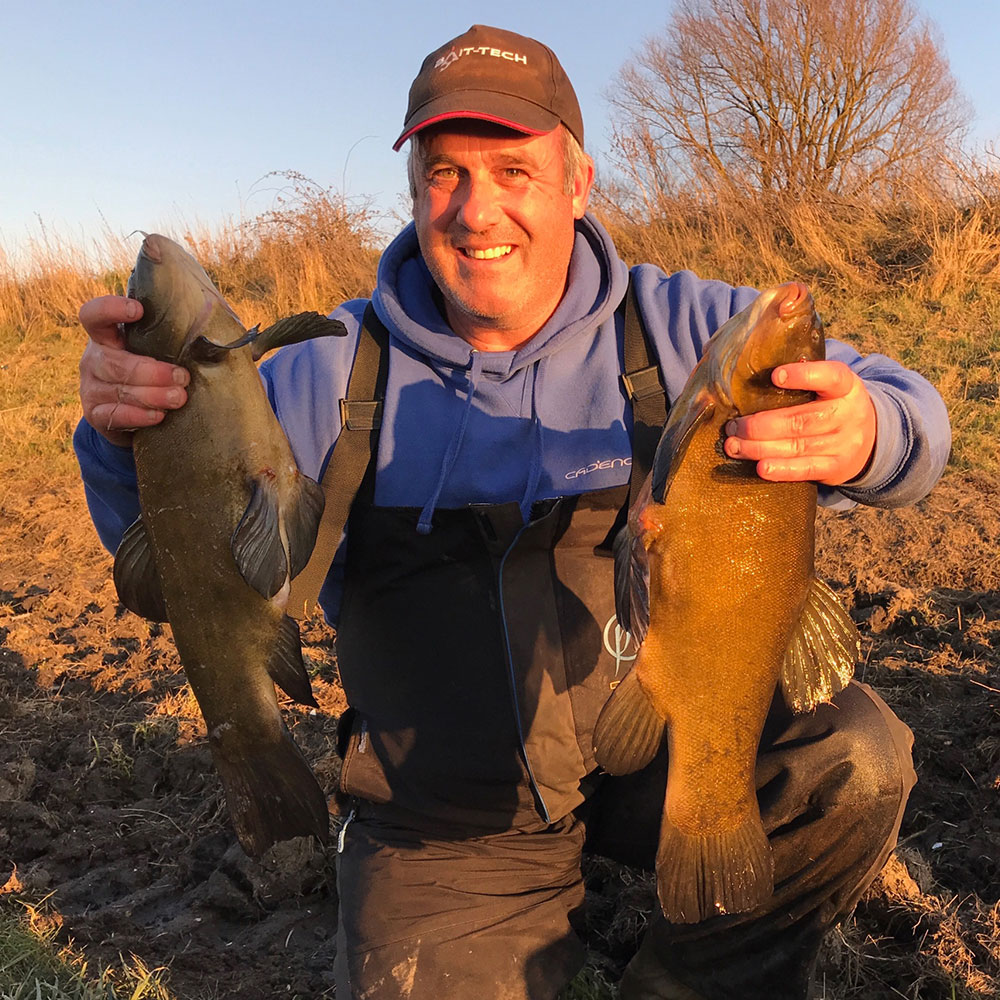 It would be an understatement of the century to say I was elated, I still am to be truthful. It hasn’t really sunk in. I have caught the odd tench further back along the River Ouse, but only ever three of four in the one session. This is my biggest ever river catch and by far the best session I have ever had at this time of year.
It just goes to show you can never be too sure about how a session on the bank is going to turn out, always expect the unexpected that’s for sure.
Tight Lines
Steve Cowley