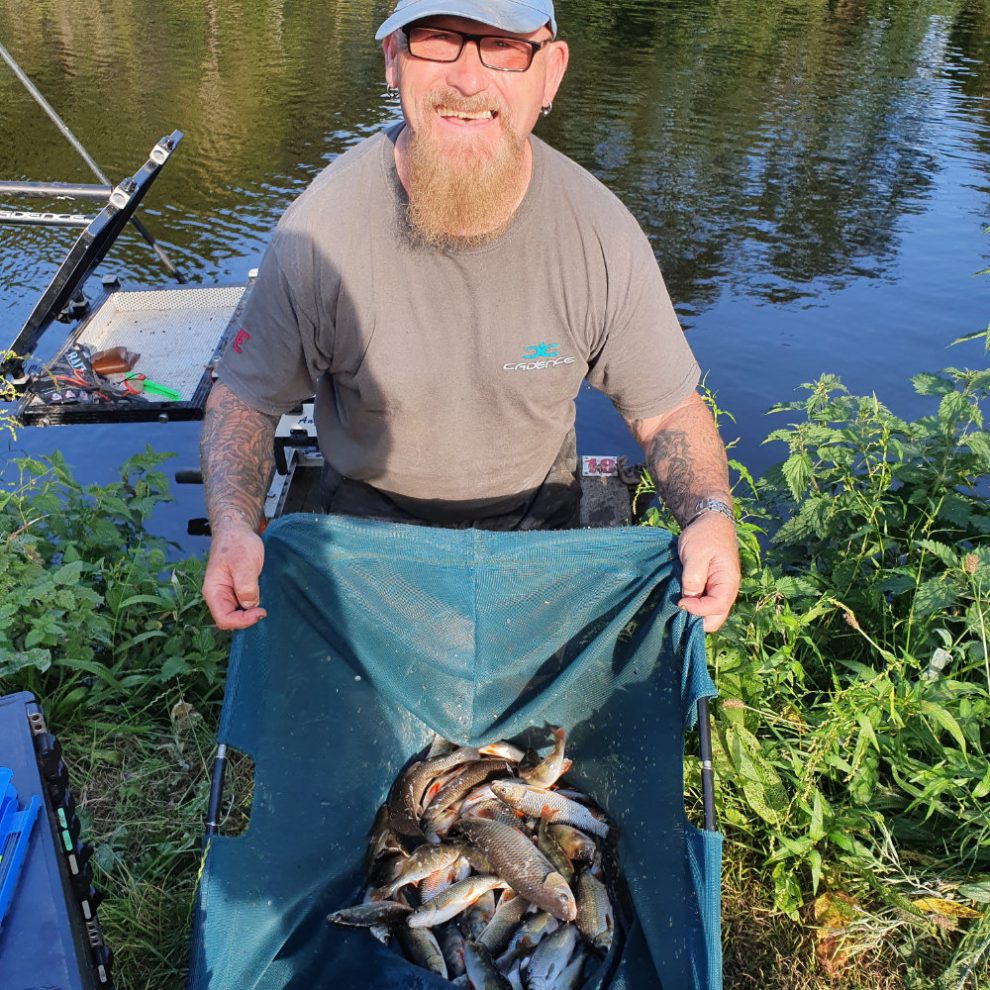 What a boost, after this Covid horror, that I’ve been able to see friends I’ve not seen for over twelve months.

The Burton Festival is one of my all-time favourites, because of the river, the organisation and all the anglers that fish it.

We all knew that drawing good pegs was an absolute must, with the river incredibly low for this time of year. The zones for this year were the Golf Course, Balies, Androssy, Municipal, Broadholme, Ferry Bridge and Sharrats. These pegs have different approaches to maximise catches, more so this year with the summer-like weather.

I always stop with my good friend Brian Rigby. This is great on a few counts, being less travel, discussions about pegs and tactics and of course, his local boozer! Where we go to break down the days fishing over a beer or two.

The Tuesday morning came around, and the usual banter was taking place – soon, it was time to draw. Out came peg ten, the Golf Course, not a peg I knew. I asked some of the other lads who fish the matches about my prospects, and what they all said was, “it’s not usually in that one”. To me, that meant two things, it was a bum draw, or it could be a flier! On arriving at the peg, my heart sank as it was a shallow gravel glide with no cover. With blazing sunshine, it was not the conditions you would want to fish this sort of peg.

My tackle for the first day of the Burton Festival consisted of two Cadence CR10 13ft #2 Match Rods with a 3AAA straight peacock float for dragging bottom. The reel was loaded with a 0.14mm mainline to a 0.90mm hooklink and a size 20 hook. The other rod was set up again with a 3AAA peacock insert with the same mainline, hooklink and hook as the other rod.

On the ALL IN, I fed caster and hemp on the stick line and maggots on the waggler line. Again, I’ll reiterate that the bright conditions are an horrendous thing to deal with, and I know if it were an overcast day, things would have been different.

After three hours, and not a bust caster or maggot, what could I do to muster a bite?

By now, the tall grass on the far side had cast a shadow on the water, and I’ve seen areas like this produce a fish or two because it is shady. I went back to my kit and got some pinkies and soft groundbait and a 4 AAA waggler to reach this far point of the river. My idea was to catapult small balls of groundbait with pinkies in on the shaded line. Within twenty minutes of doing so, I had my first bite, being a 6oz roach, followed by two dace of a similar stamp. I then had a run of tiny dace and roach for a total of 3lbs and second to last in my section.

Burton Festival Day Two dawned, and I drew Peg 18, Ferry Bridge. I was happy with this, 5lb came off the peg on day one. My approach would be to feed the worm line and fish the pole line at 13 meters with the stick float and waggler.

On the ALL IN, I fed the pole line with five balls of groundbait with pinkies in them while feeding worm short on the waggler line. Starting with the short line, I had a run of micro perch for a few ounces, so I swapped to the long line, pole fishing pinkies on the hook, which saw me catch small dace, chub, and the odd roach for an hour or so. This got me up to around 2lbs, and the line died, so I swapped back to my shorter waggler line and again for the next hour and got up to 3lbs.

I had been feeding hemp over the pole line for a while, so it was time to have a go. I had two 3oz fish in two put-ins, but that was it, so it was time for my far bank waggler line. I stayed on this for the rest of the match catching small chub for a total of 8lb 8oz, finishing second in my zone.

Day three would see me fishing Municipal 15, a peg I’ve won off in the past, but for some reason, it was not the peg it had been. My good mate and class act Riggers had fished it the day before, and he would have given every line a good seeing to, so my work was cut out. A 14.5m pole was set up fishing top six to avoid going over their heads and a different line to what Riggers had fished. I’d also be fishing with a waggler and a choppy feeder

On the ALL IN, I fed four balls laced with pinkie on the pole line and started on the choppy feeder without a bite, onto the waggler and again, no bites, so onto the pole. This produced micro dace and chub, but it was so hard producing any kind of bites, and I struggled to a 4-5-0 for second to last in the section.

I still enjoyed the Burton Festival and seeing everybody again after such a long time. Thanks to Tony and his team for such a well-organised event and the staff at Washlands HQ.

My End of Season Review