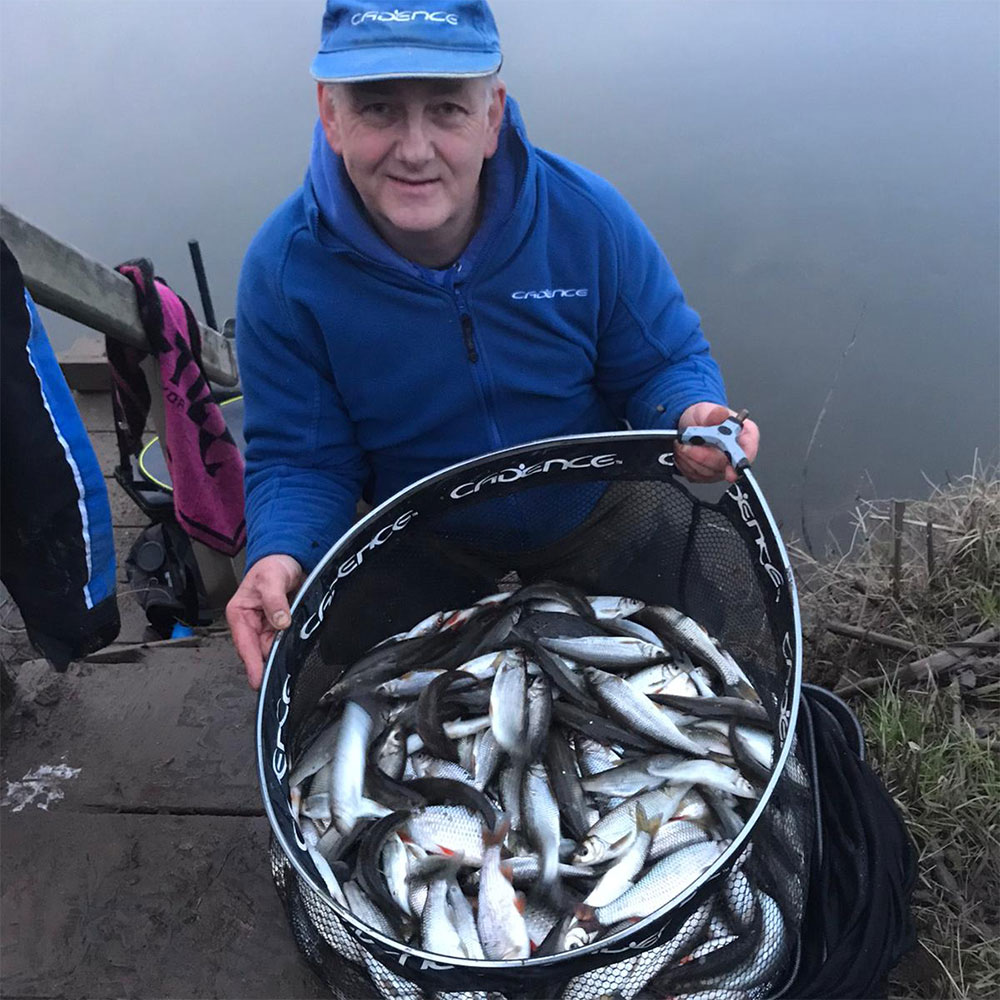 After fishing the Open on the Wye at Hereford on Sunday the 17th, James Robbins and myself decided to return for a pleasure session. We planned to try out a few things such as rigs, groundbait, feeding and also, the new Cadence Fishing 18ft #1 Match Rod.

Due to work commitments and heavy traffic we arrived later than we intended, but we’d still be able to get a good three hours fishing in. Our first stop was to see our old mate Woody at Woody’s Angling Centre to purchase our Hereford and District Angling Association day tickets. We also wanted to get the latest information on some of the pegs and how they were fishing.

After Monty, the Cadence Labrador had finished rolling around the tackle shop floor we were off to park at the Railings and fish the pegs in the mid-80s. However, on arrival, most of the pegs were taken, and we were left with pegs 88 and 89. James, being the gentleman, offered me the more comfortable peg 89.

I fished with the Cadence CR10 18ft #1 Match Rod coupled with a CS10 4000 reel loaded with 0.15mm Tubertini Gorilla float line. I started with an inline Perfect 5g bolo with a double bulk using four no 8 droppers. For the hooklength, I’ve been using a new line that has been giving me some fantastic results, its extra strong and is called Cryle Novatech from MAP in 0.125mm. I’ve also found it an excellent line for my rig lines in sizes 0.09mm through to 0.20mm. To the end of the hooklength was a size 14 B957 Colmic hook baited with two or three red maggots.

I also had a backup rod, which would be the Cadence CR10 15ft #1 Match Rod. I had this setup with a 12 no 4 stick float, shotted with 36 no 8s reverse tapered in the bottom third, fishing with the same hooklinks and hook as my primary rig. I would be fishing this one close in under my feet.

I also set up a crumper outfit, consisting of a Cadence CR10 15ft #0 Match Rod, incorporating a 6 no 4 stick float that can work for proper roach if there are not too many bleak around.

Plumbing up, I had around 14ft on the bolo line at two rods out and 12ft on the inside stick line.

My groundbait mix contained 70% Evolved Big River, 10% Evolved River and Drain, 10% Evolved Ground Hemp and 10% soil, this was mixed on the damp side with some dead maggots and a few casters.

To kick start the session, eight balls went in on the bolo line and three on the stick. The first three runs through on the bolo all produced roach in the 4 to 5oz bracket before the dace moved in. I fed a ball every run through and also caught very close in later in the session as the light faded. Both James and I finished the day with a bumper bag of fish well over 30lbs.

The Cadence CR10 18ft #1 Match Rod was a joy to use. I never felt it being heavy or tiresome during the session. There were no problems swinging in decent fish to hand, and the action was great for the bigger roach that can shake the hook. I’m sure I will be using it a lot more this winter on venues like the Warwickshire Avon with lighter rigs and smaller hooks with great success.